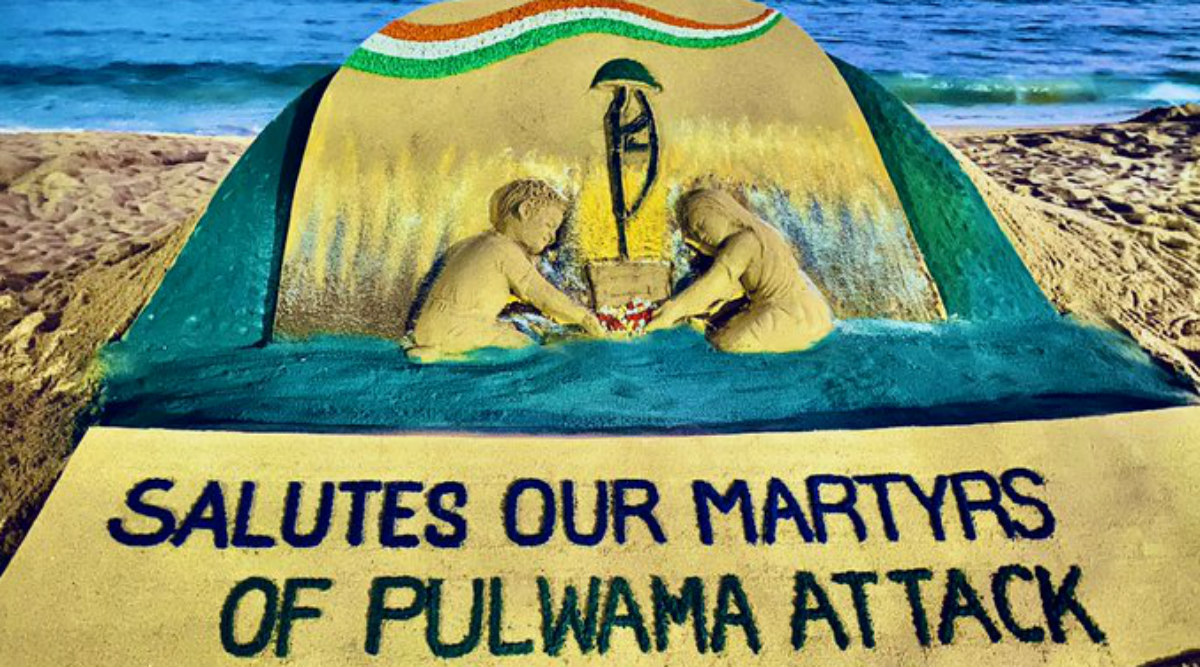 Taking to Twitter, Pattnaik paid homage to the jawans by posting a picture of his sand art at Puri Beach in Odisha. "Salute our martyrs of Pulwama attack. Jai Hind!!" he wrote. Last year after the ghastly attack on soldiers, Pattnaik conveying his condolences through sand art tweeted. Pulwama Terror Attack of February 14, 2019: One Year on, Here's a Look at What Happened and How India Responded.

Salute our martyrs of #PulwamaAttack My SandArt at Puri beach in Odisha.

"It is extremely painful to read about the attack on our brave CRPF jawans in Pulwama. My deepest condolences to the families and loved ones of our martyred soldiers."On February 14, 2019, 40 CRPF personnel were killed when their convoy was targeted by a suspected suicide bomber of Pakistan-backed Jaish-e-Mohammad in Pulwama district on the Srinagar-Jammu National Highway.

The convoy of 78 buses, in which around 2500 CRPF personnel were travelling from Jammu to Srinagar, came under attack at around 3.15 pm at Ladhu Modi Lethpora. Pakistan-based Jaish-e-Mohammed (JeM) had claimed responsibility for the attack. Following the attack, India had launched extensive diplomatic efforts to get JeM chief Masood Azhar designated as a global terrorist, which finally became a reality on May 1 last year when China lifted its technical hold on a proposal introduced by the US, the UK, and France in the 1267 Committee of the UN Security Council.

Around 12 days after the terror attack, in the wee hours of February 26, Indian Air Force (IAF) jets bombed the JeM camp in Balakot, in Pakistan's Khyber Pakhtunkhwa province.

A day later on February 27, IAF foiled an attempt by Pakistan Air Force (PAF) to strike at military installations in Jammu and Kashmir. In the aerial skirmish, Wing Commander Abhinandan Varthaman piloting a MiG-21 Bison aircraft shot down a much-advanced F-16 of PAF.

However, his aircraft was also hit and upon ejection, his parachute landed in PoK, where he was taken captive by the Pakistani Army. Under international pressure, Pakistan released the IAF pilot two days later, who returned to his country to a hero's welcome.