The tussle between Twitter, WhatsApp and Facebook and the Union government has reached its nadir, and the fact is that an absence of a stricter personal data protection law is forcing the concerned authorities to take routes like sending cops to closed Twitter offices in the pandemic or writing heaps of notices that have resulted in zero action to date. 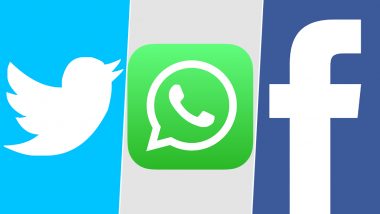 New Delhi, May 25 : The tussle between Twitter, WhatsApp and Facebook and the Union government has reached its nadir, and the fact is that an absence of a stricter personal data protection law is forcing the concerned authorities to take routes like sending cops to closed Twitter offices in the pandemic or writing heaps of notices that have resulted in zero action to date, while social networking giants continue to take the country for a ride.

The war of words between the IT Ministry and Twitter that began in February during the farmers' protests has now turned ugly with the latest toolkit controversy. New Digital Media Rules in India: Social Media, OTT Platforms, Digital News Firms Asked to Comply With Fresh Guidelines And Norms; See Details

On the other hand, WhatsApp has gone ahead with implementing its controversial user privacy policy from May 15, clearing stating that "we will maintain this approach until at least the forthcoming PDP (personal data protection) law comes into effect".

In between the ruckus, with the deadline to comply with the new IT (intermediary) rules meant for big social media platforms in India ending on Tuesday, Facebook had said it is still working towards putting operational processes in place to meet the new guidelines and "continues to discuss a few of the issues which need more engagement with the government".

According to leading experts, while the government can initiate action for suspension or blocking of intermediary apps or websites if they fail to comply with its directions over various issues, a strong data protection law is what can tame the social media platforms, the way the GDPR (General Data Protection Regulation) in the European Union (EU) has achieved. European Union's GDPR To Be Enforced on May 25; Here is the Checklist for New Online Privacy Law Compliance

According to Virag Gupta, the lawyer of former RSS ideologue KN Govindacharya, who is arguing the social media Designated Officers' matter before the Delhi High Court, the government notified the IT (intermediary) rules after a long delay and now, the same are not being strictly enforced.

"The government must come with a notification showing the compliance status by various social media companies doing business in India. As per Rule 7 in Part II of the rules, intermediary exemption of these platforms will not be available to them and they must be prosecuted under the IT Act and IPC for illegal content present on their platforms," Gupta told IANS.

After the Twitter toolkit controversy, "It also needs to be explained why the government authorities and parliamentary committee met the Indian counterpart of foreign tech companies who are neither authorised nor ready to take legal liability for their Indian operations," Gupta argued.

In case Twitter fails to comply with the government directions, the latter has the powers to resort to penal consequences.  Personal Data Protection Bill 2019: The Need For A Balancing Act Between Privacy For Indian Citizens And Allowing Enterprises To Grow

"In that direction, appropriate FIRs can be registered against intermediaries and service providers and their top management can also be made liable for the said contravention under Section 85 of the Information Technology Act, 2000," said Pavan Duggal, one of the country's top cyber law experts.

The government can exercise its power under the Section 69(A)(1). In case, any service provider or intermediary fails to comply with the provisions of the same, then there are penal consequences prescribed under Section 69A(3).

Non-compliance with directions for blocking is a non-bailable serious offence punishable with imprisonment for a term which may extend to seven years and shall also be liable to fine.

India has to learn from the EU when it comes to formulating a legal framework to secure data and tackle hateful or abusive online content, the experts said.

The EU GDPR has been designed to harmonise data privacy laws across Europe -- to protect and empower all EU citizens' data privacy and to reshape the way organisations across the region approach data privacy.

The fact of the matter is that social media biggies now listen and quickly tweak their actions - be it over the presence of controversial, hateful and fake content or user data privacy -- according to the law of the land in the EU where a central data protection law is firmly in place.

(The above story first appeared on LatestLY on May 25, 2021 04:51 PM IST. For more news and updates on politics, world, sports, entertainment and lifestyle, log on to our website latestly.com).