Finance Minister Nirmala Sitharaman on Monday started off her Union Budget 2021 speech in Lok Sabha with a quote from Rabindranath Tagore. She also remembered Indian cricket team's victory in the recently held Border–Gavaskar Trophy in Australia 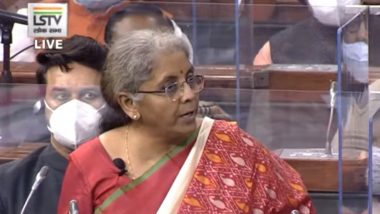 "I borrow the words of Rabindranath Tagore – Faith is the word that feels the lights and sings when the dawn is still dark," Finance Minister said while addressing the parliament. Union Budget 2021-22 Live Streaming: Watch Online Telecast of Finance Minister Nirmala Sitharaman Presenting First Digital Budget, Full Speech And Unveiling of 'Bahi Khata'.

#Live | I borrow the words of Rabindranath Tagore – Faith is the word that feels the lights & sings when the dawn is still dark: @nsitharaman, Finance Minister addresses the Parliament. | #Feb1WithTimesNow pic.twitter.com/lvbvl6MGhb

The Finance Minister also remembered Indian cricket teams victory in Australia. "In this spirit, I can't help but recall the joy that we as a Cricket loving nation felt after Team India's recent spectacular success in Australia," she said.

Sitharaman said that this budget was prepared in "circumstances like never before, in view of calamities that have affected a country or a region within a country."

"The Government stretched its resources for the benefit of the poorest of the poor. The PM Garib Kalyan Yojana, the three Aatma Nirbhar Bharat packages and subsequent announcements were like five mini-budgets in themselves," she added.

(The above story first appeared on LatestLY on Feb 01, 2021 11:29 AM IST. For more news and updates on politics, world, sports, entertainment and lifestyle, log on to our website latestly.com).