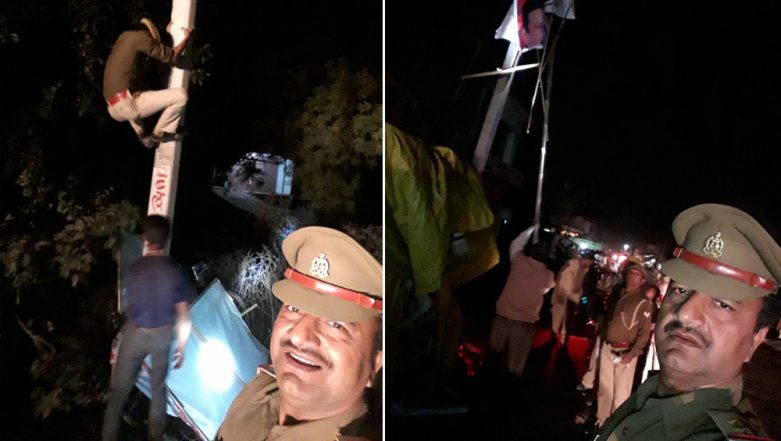 Unnao, March 11: As the Election Commission of India (ECI) on Sunday announced the 2019 Lok Sabha poll dates, district administrators everywhere in the country are busy preparing the efficient implementation of Model Code of Conduct (MCC) or Aachar Sanhita. But during the same time, a photograph of a police officer from Badarka Chowki in Anchalganj area of Uttar Pradesh's Unnao is going increasingly viral on social media. Model Code of Conduct Comes Into Force Ahead of Lok Sabha Elections 2019: What is MCC or Aachar Sanhita? Why It's Needed & How is it Enforced? All You Need to Know.

In the viral image, a police constable can be seen climbing the electricity pole to remove the political posters. The selfie which is snapped by Sub-Inspector shows constable removing political posters after MCC was imposed yesterday. For putting the life of constable in danger, the sub-inspector has been sent to the district lines and an investigation has been ordered into the matter. Lok Sabha Elections 2019 Schedule: Voting In 7 Phases From April 11 to May 19, Counting And Results On May 23; Check All Dates For General Elections.

Unnao: A Sub-Inspector clicked selfie with a constable whom he asked to climb up an electricity pole to remove political posters after model code of conduct was imposed yesterday. The SI has been sent to District Lines & an investigation has been ordered pic.twitter.com/YrLx6wHXF1

Meanwhile, on Sunday, the election commission of India announced the dates for Lok Sabha elections. The general elections in the country will be held from April 11, 2019, to May 23, 2019. Voting for the national polls will take place in 7 phases and the results and counting of votes will be held on May 23, 2019. This year, a total of 900 million people are eligible voters compared to 814.4 million in 2014.