Video of a brutal crime have surfaced from Bulandshahr in Uttar Pradesh. A man can be seen mercilessly assaulting his wife in presence of other people. The woman died on Saturday, Police have registered a case of murder and dowry harassment and is on a look out for the accused. 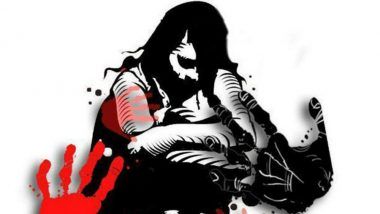 Lucknow, September 20: In yet another incident of crime and brutality against women, videos showing a man mercilessly thrashing his wife have surfaced. The videos show the physical ordeals that the woman was allegedly subjected to at the hands of her husband. Report informs that few other people, allegedly the man's family members, can also be seen in the video footage that was reportedly shot on Friday and Saturday. The woman passed away on Saturday. The incident has been reported from Bulandshahr in Uttar Pradesh.

The horrific visuals show that the woman, who was allegedly brutally assaulted by her husband, had blood dripping from her mouth. Report informs that a voice of a woman saying 'Do not beat her so badly' can be heard in one of the videos. According to a report by the NDTV, the videos of the incident were released to the media by the deceased's sister, however it remains unclear who shot them. Meanwhile, the police has filed a case of murder and dowry in the matter. Uttar Pradesh Shocker: Man Hangs Wife over Dowry, Arrested.

The deceased's sister has claimed that the duo got married last month and man, identified as Hashim, used to beat his wife on a regular basis She told the media "This man had married my sister last month claiming to her that he was in the process of getting divorced from his first wife. But he used to assault her regularly. I want that something like this should never happen to any woman. He should be caught and punished," as reported by the NDTV. Uttar Pradesh Shocker: Inebriated Man Beats Wife to Death in Kheri District As She Accidently Drops His Glass of Liquor.

Meanwhile, the Uttar Pradesh Police has filed a case of murder and dowry harassment after the deceased's father registered a complaint in the matter. The police is trying to locate and nab the accused who are on a run. So far no arrest has been made in the matter.

A similar incident was reported from Uttar Pradesh a month back. A man allegedly beat up his wife and then hanged her in Tundwal village under Sursa police circle, as reported by the IANS.  The video of the incident went viral where the accused can reportedly beating and dragging his wife on road. The deceased's father alleged that the accused used to harass the woman for dowry.

(The above story first appeared on LatestLY on Sep 20, 2021 04:44 PM IST. For more news and updates on politics, world, sports, entertainment and lifestyle, log on to our website latestly.com).