Uttar Pradesh Shocker: Family Tries to Resurrect Dead Daughter Through Witchcraft in Prayagraj, Her Siblings Fall Ill Due to Starvation

In a shocking news, the body of a 14-year-old girl, who passed away four days ago, was kept at home by her family members in the hope of reviving her through witchcraft in Diha, a village of Karchanna in Uttar Pradesh’s Prayagraj. 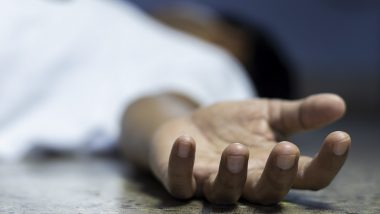 Prayagraj, July 1: In a shocking news, the body of a 14-year-old girl, who passed away four days ago, was kept at home by her family members in the hope of reviving her through witchcraft in Diha, a village of Karchanna in Uttar Pradesh’s Prayagraj.

However, four of the deceased’s siblings fell sick in the process after they were barred from consuming any food for the last four days as a part of a ritual, reported Hindustan Times.

The incident came to light after villagers reported a foul odor from farmer Abhayraj Yadav's home. Jharkhand Shocker: Elderly Couple Killed by Relative in Chainpur on Suspicion of Practising Witchcraft

When the cops broke into the house, they found the minor's body and her four siblings on the floor. While the siblings were treated at SRN Hospital in Prayagraj, the young girl's body was sent for a postmortem. According to reports, the girl died as a result of an illness. Jharkhand Shocker: Woman Set on Fire Over Witchcraft Suspicion in Simdega District, 6 Arrested

Questioning of the family members revealed that they were performing a special puja (ritual) to please Bamba Devi (a local deity) for reviving the dead girl. They were not consuming food for the past four days and were surviving only on river water."

Dixit said, "No involvement of any sorcerer has been found in the incident yet. The family members tried reviving the dead girl by pleasing the deity. " SP -trans Yamuna Saurabh Dixit was quoted as saying by HT.

He mentioned that very little food and grains were found in the home but the police were able to find burnt articles.

“Abhayraj’s family had severed ties with other villagers and relatives some time back. One of his four married daughters used to live with them. The family used to throw bricks and chase away their relatives and even their other three daughters whenever they came to visit them," the report quoted Umashankar, a relative of the family.

Neighbors confirmed that the family frequently discussed seeing spirits and witches in their fields and engaging in black magic. However, no FIR has been filed.

(The above story first appeared on LatestLY on Jul 01, 2022 04:56 PM IST. For more news and updates on politics, world, sports, entertainment and lifestyle, log on to our website latestly.com).