A minor sister-brother duo ran away from their house after leaving a note. The incident took place in Kalyanpur town of Kanpur in Uttar Pradesh. 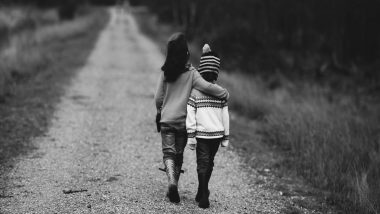 Kanpur, September 21: A minor sister-brother duo ran away from their house after leaving a note. The incident took place in Kalyanpur town of Kanpur in Uttar Pradesh. Fifteen-year-old Priya and her 13-year-old brother Naitik left their house on September 19. In a note, they blamed frequent fights between their parents for taking the step. The police have formed two teams to find the missing children. UP: Irked Over Wife Visiting Maternal Home Frequently, Man Hacks Her to Death in Kanpur Dehat.

Priya and Naitik's father Lalaram used to work at a cold storage facility in Gujarat. During the second wave of coronavirus pandemic, Lalaram lost his job and the family moved to a rented house in Kalyanpur. According to a report by Times of India, Lalaram and his wife Savitri would often fight over domestic issues in front of their kids. On September 19, Priya and Naitik told their parents that they were going to temple and left the house. Uttar Pradesh Shocker: Married Woman Killed by Cousin After Failed Rape Attempt in Kanpur Dehat; Accused Arrested.

When the kids did not return for a long time, Lalaram and Savitri began looking for them. They later found a letter in house written by their children. In the letter, Priya and Naitik said they love their parents, but don't want to become a burden on them. Mentioning that they are upset over their parents' frequent fights, the sister-brother duo said they will find some job and live peacefully. They also urged their father not to fight with their mother.

Later, Lalaram lodged a missing complaint. To find the kids, the police shared their photographs on social media and informed their counterparts in the city and nearby districts. GRP officials at the railway stations and authorities at the bus stations have also been alerted.

(The above story first appeared on LatestLY on Sep 21, 2021 02:15 PM IST. For more news and updates on politics, world, sports, entertainment and lifestyle, log on to our website latestly.com).