The all India temperatures (maximum and mean) recorded till April 28, 2022, are the fourth highest with 35.05 degrees Celsius in last 122 years. 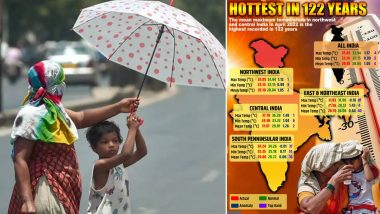 New Delhi, April 30: As a result of the continued heatwaves, the maximum temperatures in northwest and central India were the highest for the month of April in the last 122 years, the India Meteorological Department (IMD) announced on Saturday.

Earlier, March 2022 was the hottest in 122 years for the country, as well as northwest India.

The mean maximum #temperature in northwest and central #India in April 2022 is the highest recorded in 122 years#heatwaveinIndia pic.twitter.com/gun1lmMEMV

The Department added that temperatures would continue to be above normal also in May.

"Normal to below normal minimum temperatures are likely over the south peninsular India and few pockets of extreme northwest India."

Meanwhile, the rainfall in May averaged over the country is most likely to be above normal (more than 109 per cent of the Long Period Average).

(The above story first appeared on LatestLY on Apr 30, 2022 03:35 PM IST. For more news and updates on politics, world, sports, entertainment and lifestyle, log on to our website latestly.com).