The final draft of NRC Assam, which is now available at nrcassam.nic.in, featured the names of 2,89,83,677 people. 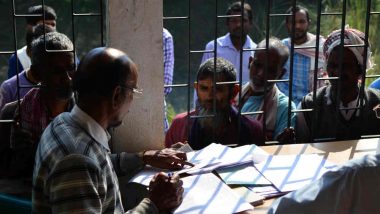 Guwahati, July 30: The Assam government on Monday released the final draft of National Register of Citizens (NRC) for the state. The final draft of NRC Assam, which is now available at nrcassam.nic.in, featured the names of 2,89,83,677 out of 3,29,91,384 people as legal citizen of India. Names of 40,07,707 people are not included in the NRC draft.

"This is just a draft, and not the final list. The people who are not included can make claims and objections," state NRC coordinator said. Assam Chief Minister Sarbananda Sonowal has also said no one will be treated as foreigner if name not in NRC final draft. No case will be referred to Foreigners Tribunal and no person will be detained based on the NRC draft.

Here's what you can do if your name is left out of the NRC Assam draft:

If a person’s name is not included in the NRC draft, he/she can apply in prescribed forms in their respective NRC Sew Kendras. These forms will be available from August 7 to September 28 and the authorities will then inform them the reason for his/her name being left out. Three forms will be issued - Claim Form, Objection Form and Correction Form.

In the next step, they will have to file the claim in another prescribed form which will be available from August 30 to September 28 and these claims will be finally disposed of after proper hearings. If your name featured in the first draft but is missing from final draft, you will be given an individual letter to file claim for your non-inclusion during claims and objections.

The NRC, which was prepared in 1951, is updated for only Assam to weed out illegal immigrants, mainly Bangladeshi. The first draft of the NRC was published on the intervening night of December 31 and January 1. As many as 1.9 crore people were included as legal citizens of India in the first draft.

(The above story first appeared on LatestLY on Jul 30, 2018 10:51 AM IST. For more news and updates on politics, world, sports, entertainment and lifestyle, log on to our website latestly.com).