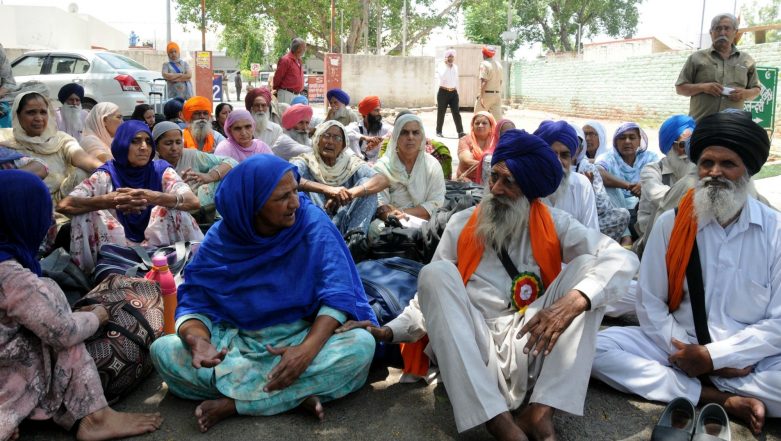 Pilgrims who were supposed to cross over to Pakistan. (Photo Credits: IANS)

Amritsar, June 14: At least 130 Sikh pilgrims heading for Pakistan were left stranded at the Attari railway station on Friday as the Indian government did not grant them permission to cross the international border. The pilgrims, mostly elderly and hailing from various parts of Punjab, were going to Pakistan to observe the martyrdom anniversary of Guru Arjan Dev, the fifth Sikh Guru.

They reached Attari station in the morning, but the special train from Pakistan didn't get clearance to enter the Indian side. Indian railway authorities said there was no permission from the government so the train from Pakistan was not allowed. Pakistan Government Grants Rs 100 Crore in 2019-20 Budget for Kartarpur Corridor Project.

There was a lack of communication between the railways and the Minitry of External Affairs, rued a stranded passenger. The stranded pilgrims raised slogans against the government. They also complained that there was lack of drinking water and toilet facilities.

"The moment we will get the permission, we will allow the train to enter Attari," Station Master M.L. Rai told reporters. The SGPC every year sends four 'jathas' to Pakistan in a year.

The biggest one goes to Nankana Sahib, the birthplace of the Sikhism founder Guru Nanak Dev, in November to celebrate his birth anniversary. Another 'jatha' goes on festival of Baisakhi in April. Pakistan, India Officials Meet, Discuss Modalities for Kartarpur Corridor.

The remaining two leave in May-June on the martyrdom anniversary of Guru Arjan Dev and the death anniversary of Maharaja Ranjit Singh, the founder of the Sikh empire.