The Patna district administration on Sunday launched an anti encroachment drive and demolished 90 illegal structures, according to the District Magistrate of Patna. 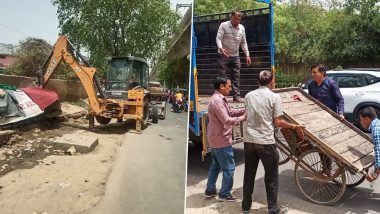 Patna, July 3: The Patna district administration on Sunday launched an anti encroachment drive and demolished 90 illegal structures, according to the District Magistrate of Patna.

The anti-encroachment drive was started at 5.30 a.m. in Rajiv Nagar and Nepali Nagar localities of central Patna. During the drive, the district administration faced stiff resistance from the local residents who had stored bricks and stones on the rooftops of the buildings and pelted them on the police party, officials of district administration and Bihar Rajya Awas Board. Umesh Kolhe Murder Case: Amravati Killing Prime Accused Sent to Police Custody Till July 7

Half a dozen police personnel including City SP central Ambrish Rahul were injured in the clash.

"As we faced stiff resistance from the encroachers, our police force fired tear gas shells on them. Some police personnel also sustained injuries including City SP Ambrish Rahul. We have arrested 12 persons so far and efforts are on to identify others," said Chandrashekher Singh, District Magistrate of Patna.

"Rajiv Nagar and Nepali Nagar were developed illegally by land mafias. The registries here have been completely banned. Still, the majority of them got the registry done at other places or took the power of attorney of lands which belong to Bihar Rajya Awas Board and local land mafias illegally sold this land to innocent people," Singh said.

"We had served legal notice to every resident to vacate the land a month ago. Still, they ignored it. We eventually used force to remove the encroachment. The structures which were demolished are under construction," Singh said.

Meanwhile, local residents claimed that they are the legal owners of land and also paying municipal taxes, electricity and power bills for more than 20 years. If the land belongs to Bihar Rajya Awas board, how would we get government facilities like power supply and house tax deposit.

"The government officials including land record and registry officials, municipal corporation officials, police officials and others should be booked for taking bribes and allowing construction. This is a matter of corruption and officials are directly responsible for it. When the construction took place in these areas, why did law enforcement agencies not stop that?" Yadav said.

(The above story first appeared on LatestLY on Jul 03, 2022 08:33 PM IST. For more news and updates on politics, world, sports, entertainment and lifestyle, log on to our website latestly.com).