In a massive turnaround for the Congress in Rajasthan, the party is predicted to oust the Vasundhara Raje-led government with nearly a three-fourth majority. 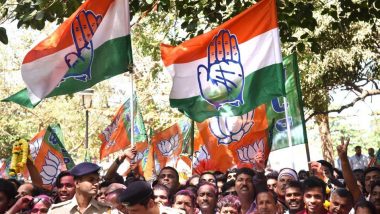 New Delhi, October 6: A fresh pre-poll survey has given the Congress a solid edge moving into the assembly elections of Madhya Pradesh, Rajasthan and Chhattisgarh, to be held in November-December, 2018. The opinion poll, conducted by ABP News, predicts a full-majority victory for the Congress in the three states. Check Full Schedule and Dates of Upcoming Assembly Polls.

Notably, the three poll-bound states are currently being ruled by the Bharatiya Janata Party. The incumbency factor is poised against the BJP, as the party has been in power for 15 years in MP and Chhattisgarh, and 5 years in Rajasthan. Below are the state-wise opinion poll predictions:

As per the survey predictions, the Congress would bag 122 seats in the 230-member assembly -- seven more than the majority mark. The incumbent Shivraj Singh Chouhan-led BJP would be reduced to 108 constituencies, from its current strength of 160. Others, including regional parties and independents, are predicted not to win any seat, but collectively secure a vote share of 16.3 per cent.

In the 90-member Chhattisgarh assembly, the opinion poll predicts a thin majority for the Congress. The grand-old party will win 47 seats, claims the survey, further adding that the incumbent BJP, led by Raman Singh, will be reduced to 40 constituencies. Others, including the alliance between Ajit Jogi's party and Mayawati's BSP, may win 3 assembly segments.

In a massive turnaround for the Congress in Rajasthan, the party is predicted to oust the Vasundhara Raje-led government with nearly a three-fourth majority.

The Congress may win 142 constituencies with an unprecedented vote share of 50 per cent, the survey claims, adding that the BJP would be reduced to 56 seats with an electoral share of 34 per cent. Others will fail to open their account, despite their collective vote share being predicted as 16 per cent.

Notably, in the last assembly elections held in 2013, the BJP had stormed to power winning 163 seats in the 200-member assembly. Analysts attribute the potential reversal of sorts to the anti-incumbency wave against Chief Minister Vasundhara Raje.

(The above story first appeared on LatestLY on Oct 06, 2018 08:56 PM IST. For more news and updates on politics, world, sports, entertainment and lifestyle, log on to our website latestly.com).