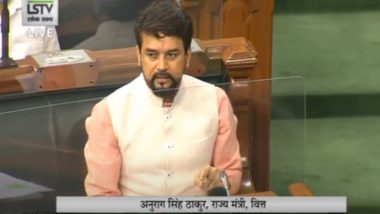 New Delhi, September 18: The Lok Sabha on Friday was adjourned after opposition Congress protested against comments made by Union Minister of State (Finance) Anurag Thakur on former Prime Minister Jawaharlal Nehru. Thakur, while addressing the House, had compared Nehru's PMNRF with PM-CARES Fund and questioned Gandhi family's association. However, when the House resumed, Thakur apologised for his remarks and said that he had no intent to hurt the sentiments of anybody.

Answering a question over PM-CARES Fund in the House, Thakur had said, "Opposing PM Cares Fund, just for the sake of it, is like they opposed EVMs & then lost many elections. They subsequently termed Jan Dhan, demonetization, Triple Talaq & GST as bad. They find a defect in everything, truth is their intention is defected." Lok Sabha Passes Farmers’ Produce Trade and Commerce Bill and Farmers Agreement on Price Assurance and Farm Services Bill.

Adding more, he said, "Nehru ji ordered the creation of Prime Minister's National Relief Fund in 1948 like a royal order but its registration has not been done even till today. How did it get FCRA clearance?" While hitting out at Jawaharlal Nehru and Sonia Gandhi, the MoS Finance said, "PM-CARES Fund is a public charitable trust which has been set up for the people of India. You (Opposition) created trusts for Gandhi family. Nehru & Sonia Gandhi have been members of PM's National Relief Fund. There should be a debate on this."

Following his remarks, opposition Congress was miffed and the Lok Sabha was adjourned. Prior to this, Congress leader Manish Tewari had said, "Since the PM CARES Fund has the name of the institution of the Prime Minister attached to it, wouldn't it have been more appropriate if this fund would have been created through legislation rather than as a public trust."

When the Lok Sabha resumed, the MoS Finance apologised for his remarks on Jawaharlal Nehru and said, "I had no intent to hurt the sentiments of anybody. Agar kisi ko thes pahunchi hai, to mujhe bhi is baat ki peeda hai (If anybody is hurt with this (my remarks), I am deeply pained with it."

(The above story first appeared on LatestLY on Sep 18, 2020 05:06 PM IST. For more news and updates on politics, world, sports, entertainment and lifestyle, log on to our website latestly.com).