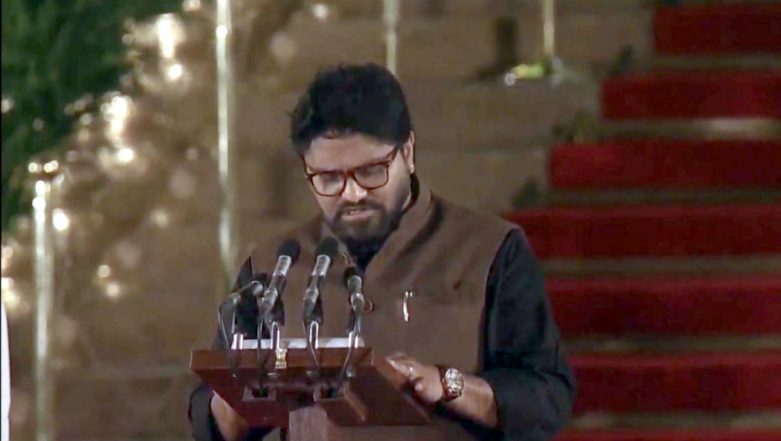 New Delhi, May 30: Singer-turned-politician and former Minister of State for Heavy Industries and Public Enterprises in the last NDA government, Babul Supriyo, was sworn-in as a minister in Prime Minister Narendra Modi new government on Thursday. Supriyo retained his Lok Sabha constituency seat of Asansol in the 2019 general elections.

Supriyo has played many a part with aplomb at various stages of life. Born and bred in the small town of Uttarpara in Bengal's Hooghly district, the grandson of noted Bengali vocalist and composer Banikantha N.C. Baral, Supriyo made a big bang entry into politics five years back, when he scored a big upset by winning the Lok Sabha election from Asansol constituency. Rameswar Teli Takes Oath As Union Minister in PM Narendra Modi's Cabinet.

The BJP was then organisationally quite weak in Bengal, but Babul charmed the electorate with his affable nature, hard work, go-getter personality and simple but impressionable speeches to become one of the only two BJP MPs from the state at that time.

Supriyo was inducted into the first Modi government as a Minister of State (MoS) in the Ministry of Urban Development; and Ministry of Housing and Urban Poverty Alleviation. He was then given the position of MoS for Heavy Industries and Public Enterprises.

The 48-year-old Supriyo's steely resolve with a cool-as-a-cucumber exterior has over the years impressed many people, one of them being Modi.

Born on December 15, 1970, and married to an air-hostess, Rachna Sharma, - his second wife - Supriyo has taken special interest in the under-construction East West Metro Railway project over the past five years, monitoring every step in its progress and going all out to solve the various bottlenecks.

A B.Com Honours degree holder, Supriyo is articulate and a face of the party in Bengali television debates and panel discussions.

The man, who at the start of his career as an entertainer changed his birth name of Supriya Baral to Babul Supriyo, made his mark as an accomplished singer in both Hindi and Bengali films, besides coming out with hit solo albums. He has to his credit hits like "Dil Ne Dil Ko Pukara", "Pari Pari Hai Ek Pari" and the title song of the movie "Hum Tum".

He has also acted in two films of Srijit Mukherjee - "Uma" and "Shah Jahan Regency". Srijit recently announced that Supriyo would also act in his forthcoming film "Gumnami" based on Netaji Subhas Chandra Bose's life.

While his political career so far has been quite a fairy tale, Supriyo courted controversy when Trinamool Congress leader Mahua Moitra filed a police complaint against the singer-politician for allegedly insulting her during a television debate.

Under him, the Heavy Industries Ministry saw new initiatives like a push for electric vehicles and a plan to restructure and sell-off of loss making PSUs like Scooter India.