Bhagalpur Vidhan Sabha seat lies in the district with the same name Bihar. The Bhagalpur constituency falls under the Bhagalpur Lok Sabha seat. Voting for Bhagalpur election will take place in the second phase of Bihar Assembly Elections 2020 on November 3. 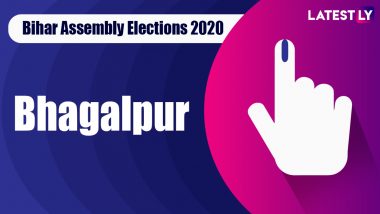 Voting for the Bihar Vidhan Sabha polls 2020 took place in three phases on October 28, November 3 and 7. The counting of votes for all phases took place on November 10. A total of 94 constituencies, including Bhagalpur, voted in the second phase on November 3.

Bihar Assembly Elections 2020 were the first major polls in the country amid the COVID-19 outbreak. It is because of the pandemic that the polls had been brought down to three phases while voting timing had been increased by an hour. The NDA won the election with 125 seats.

(The above story first appeared on LatestLY on Nov 11, 2020 12:22 PM IST. For more news and updates on politics, world, sports, entertainment and lifestyle, log on to our website latestly.com).