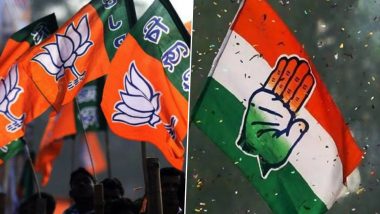 New Delhi, October 16: The Bharatiya Janata Party (BJP) recieved the highest donation from corporate donors in the year 2018-19, according to a report released by the Association for Democratic Reforms (ADR) on Thursday. The BJP recieved Rs 698 crore from 1573 corporate donors. The Congress came a distant second with a total contribution of Rs 122.5 crore from 122 corporate donors, said the ADR reports. PM Narendra Modi’s Net Worth Increases To Rs 2.85 Crore As Of June 2020, Is Richer Than Last Year; Home Minister Amit Shah Is Slightly Poorer This Year.

The Nationalist Congress Party (NCP) was on the third position with Rs 11.345 crore from 17 corporate donors. Political parties considered in the ADR report are BJP, Congress, NCP, CPM and Trinamool Congress. BSP, a national party, was not considered because it has declared that it recieved no voluntary contribution above Rs 20,000 from any donor since 2004. CPI did not declare any income from corporates in the year 2018-19.

The ADR report also revealed that Tata Group-backed Progressive Electoral Trust was the largest donor to political parties in 2018-19. Prudent Electoral Trust made donations amounting Rs 102.25 crore during the same period. The agency also noted that "donations from corporates to the national parties increased by 131% from the period 2004-12 and 2018-19." Rajya Sabha Elections 2020 Results: 44% of Newly Elected 62 MPs Face Criminal Charges, Says ADR-NEW Analysis.

(The above story first appeared on LatestLY on Oct 16, 2020 03:30 PM IST. For more news and updates on politics, world, sports, entertainment and lifestyle, log on to our website latestly.com).