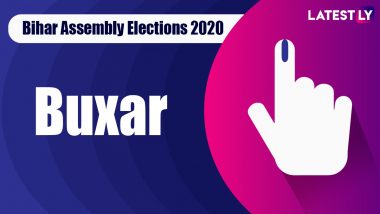 As per the estimates of 2011 census, out of total 394859 population, 71.92 percent is rural and 28.08 percent is urban population. The Scheduled castes (SC) and Scheduled tribes (ST) ratio is 14.38 and 1.85, respectively out of the total population. Bihar will go to polls in three phases. Phase 1 voting will take place on October 28 in 71 Assembly constituencies. Arwal Vidhan Sabha Seat in Bihar Assembly Elections 2020: Candidates, MLA, Schedule And Result Date.

The candidates for Bihar election 2020 from the Buxar constituency is Parshuram Chaubey from BJP, Ashwini Kumar Rai from Hindu Samaj Party among other candidates.  Ashwini Kumar Choubey  from BJP is the present Lok Sabha MP of Buxar and Sanjay Kumar Tiwari alias Munna Tiwari from Congress party is the present MLA of Buxar Legislative Assembly

The NDA alliance is likely to emerge as the clear favourite to win the Bihar assembly elections by securing 160 of the 243 seats, according to an opinion poll released by Times Now-CVoter. As per the IANS C-Voter Bihar opinion poll survey, 30.9% of the people are still backing Nitish Kumar as the most preferable candidate to be the chief minister again.

(The above story first appeared on LatestLY on Oct 17, 2020 10:06 AM IST. For more news and updates on politics, world, sports, entertainment and lifestyle, log on to our website latestly.com).