In a meeting of the Congress Legislature Party, Rajasthan Chief MInister Ashok Gehlot has indicated that he will file his nomination for the post of national president of the party. 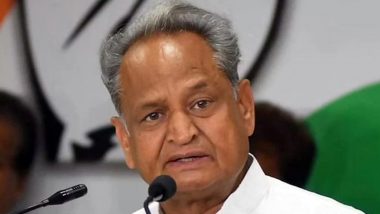 Jaipur, Sep 21: In a meeting of the Congress Legislature Party, Rajasthan Chief MInister Ashok Gehlot has indicated that he will file his nomination for the post of national president of the party.

Addressing the meeting, Rajasthan CM said, "I will try to convince Rahul Gandhi for the last time, if he does not agree, then I will trouble you and follow the order of the high command."

Soon after his announcement, many MLAs were seen requesting him to stay here. Congress to Implement Old Pension Scheme If It Forms Government in Gujarat, Himachal Pradesh, Says Rajasthan CM Ashok Gehlot.

Answering them, Gehlot said, "Whatever I become, but I will not stay away from you, I will serve Rajasthan till my last breath."

In fact, he also hinted that he shall continue as CM as he asked MLAs to start working for the Budget.

Gehlot, as per the plan, will leave for Delhi on Wednesday morning at 10 a.m. where he will meet some veteran leaders. In the evening, he will take a tour from Delhi to Kochi where he will meet Rahul Gandhi and will join the yatra symbolically. Gehlot may try to persuade Rahul to file his nomination for the post of president. Gehlot himself has indicated this in the meeting.

The CLP meeting on Monday night was called on an urgent basis without any pre planned note. The Assembly session is going on. Generally, such meetings are called before the start of the session, however this time the meeting was called after two days.

Earlier on September 17, in the meeting of the newly appointed PCC members, Gehlot had raised the idea of making Rahul Gandhi the president. All the leaders supported his proposal.

(The above story first appeared on LatestLY on Sep 21, 2022 09:26 AM IST. For more news and updates on politics, world, sports, entertainment and lifestyle, log on to our website latestly.com).