In the video, Singh can be heard saying, "I am sorry to say whether it is Rahul-ji or Priyanka-ji, they don't devote as much time (to the party), and so people feel disappointed. And (they also) don't give as much importance (to the party leaders)." 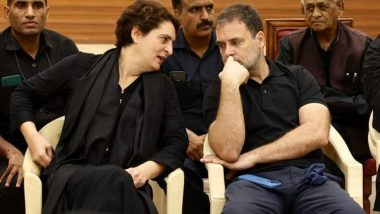 Shimla, September 20: Rahul Gandhi and Priyanka Gandhi Vadra do not devote enough time and importance to the Congress party and its leaders, president of the party's Himachal Pradesh unit Pratibha Singh has said, according to a video posted online.

"I feel there is a little generation gap. What our seniors used to do, now the youngsters don't do that. What Sonia-ji, Indira-ji or Rajiv-ji used to do, today's generation don't do that," Singh told ThePrint in an interview in Hindi and English. However, the Congress leader later claimed that she was misquoted and urged the website to take down the interview.

"An interview published by @ThePrintIndia wrongly quotes my statements. I never made any statement disparaging the Congress leadership and the Gandhi family. The interviewer has taken creative liberties with my statements, misquoted throughout the interview," Singh said in a tweet. Congress President Election: Rajasthan CM Ashok Gehlot Calls MLAs for Unscheduled Meeting Before Trip to Delhi.

The Mandi MP also said in a video message later that Rahul and Priyanka Gandhi are like her children and whatever advice she gave them should not be misunderstood.

In the video, Singh can be heard saying, "I am sorry to say whether it is Rahul-ji or Priyanka-ji, they don't devote as much time (to the party), and so people feel disappointed. And (they also) don't give as much importance (to the party leaders)."

"Many people who have left the party. And you know what (Ghulam Nabi) Azad-ji did after serving the nation for so long and he gave an open interview and said he was not being heard and was being made to wait for several months (to get an opportunity to talk to the party high command)," Singh said in the video.

And since many Congress leaders were not getting the respect from the generation of today, they felt it was time for them to leave, she added. "Now Rahul-ji is in his third term in Parliament, I think. So he should learn. I am not saying I am giving him advice. In the interest of the party, I am saying that if you feel people are disappointed with your actions, then give them some time, listen to their grievances. Try to learn something. Then probably the party would have not reached this situation," Pratibha Singh, late Himachal Pradesh chief minister Virbhadra Singh's wife, said. Congress Presidential Election 2022: Rahul Gandhi Not Likely to Contest President Polls.

Later, however, she asked the website to take the interview down and issue an apology. In her video statement, the Congress leader said, "As far as Rahul Gandhi, Priyanka are concerned, as an elderly person, I always feel they are like children to me. If I advise my children or if I say something to my children, I would tell them in the same way. This should not be misunderstood and it should not convey any different meaning at all."