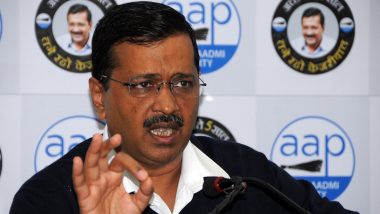 New Delhi, February 11: With the sweeping win in Delhi assembly elections 2020, Aam Aadmi Party (AAP) supremo and Chief Minister Arvind Kejriwal joined a list of top Indian politicians who have struck "hat-tricks" to retain the CM post. The list includes several heavyweights, including Bharatiya Janata Party (BJP) stalwart and Prime Minister Narendra Modi. Here are some of the prominent names to have led their parties to three consecutive poll victories in the assembly polls.

Jyoti Basu, the late veteran Communist Party of India (Marxist) leader, won the West Bengal assembly elections consecutively between 1977-2000 under his leadership. He was the CM for five consecutive terms, for a period of 23 years. In the Northeast, Pawan Kumar Chamling was the Chief Minister of Sikkim for five consecutive terms between 1994 to 2019. PM Narendra Modi Extends Greetings to Arvind Kejriwal on AAP Victory in Delhi Assembly Elections 2020.

Kejriwal's predecessor, the late former chief minister of Delhi - Sheila Dikshit - headed the government in the national capital territory for 15 consecutive years between 1998 to 2013. She had passed away last year, months after leading a charged but unsuccessful Congress' campaign in the Lok Sabha elections 2019.

Narendra Modi, who witnessed a meteoric rise after taking over as the Gujarat Chief Minister in 2001, also struck a hat-trick with three consecutive poll victories. His tenure as the CM, from 2002 to 2014, saw the Congress losing its hold in the state which was once its bastion. Modi subsequently transcended to the national scale, being elected as the Prime Minister.

(The above story first appeared on LatestLY on Feb 11, 2020 08:12 PM IST. For more news and updates on politics, world, sports, entertainment and lifestyle, log on to our website latestly.com).