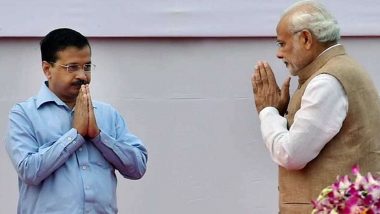 New Delhi, February 11: Prime Minister Narendra Modi extended greetings to Delhi Chief Minister Arvind Kejriwal after the Aam Aadmi Party (AAP) scripted a historic victory in the Delhi assembly elections 2020. Modi, who had initiated the fierce campaign launched by the Bharatiya Janata Party (BJP) to unseat the AAP from power, posted a congratulatory message for Kejriwal on Twitter after the results were out.

"Congratulations to AAP and Shri @ArvindKejriwal Ji for the victory in the Delhi Assembly Elections. Wishing them the very best in fulfilling the aspirations of the people of Delhi," the Prime Minister tweeted, shortly after BJP president JP Nadda and Defence Minister Rajnath Singh sent a similar congratulatory message to the Delhi CM. Rahul Gandhi Congratulates Arvind Kejriwal on AAP's Landslide Win in Delhi Assembly Elections 2020.

Congratulations to AAP and Shri @ArvindKejriwal Ji for the victory in the Delhi Assembly Elections. Wishing them the very best in fulfilling the aspirations of the people of Delhi.

The results and trends declared by the Election Commission so far point towards a victory for the AAP in 62 out of the 70 seats in Delhi. The BJP is restricted to 8 seats -- marginally better than the 3 constituencies they had won in the 2015 polls. The Congress has ended up drawing a blank in second consecutive elections.

The electioneering in Delhi, during the fortnight preceding the polls, witnessed a fierce verbal battle between the AAP and the BJP. The latter was accused of resorting to polarisation and communalism to shift the voters' attention away from development-related issues. Senior BJP leaders, including Union Minister Prakash Javadekar, had called Kejriwal a "terrorist". Home Minister Amit Shah had described the Delhi electoral battle as a contest between those backing the "Shaheen Bagh" and those standing with "Bharat Mata".

(The above story first appeared on LatestLY on Feb 11, 2020 06:54 PM IST. For more news and updates on politics, world, sports, entertainment and lifestyle, log on to our website latestly.com).