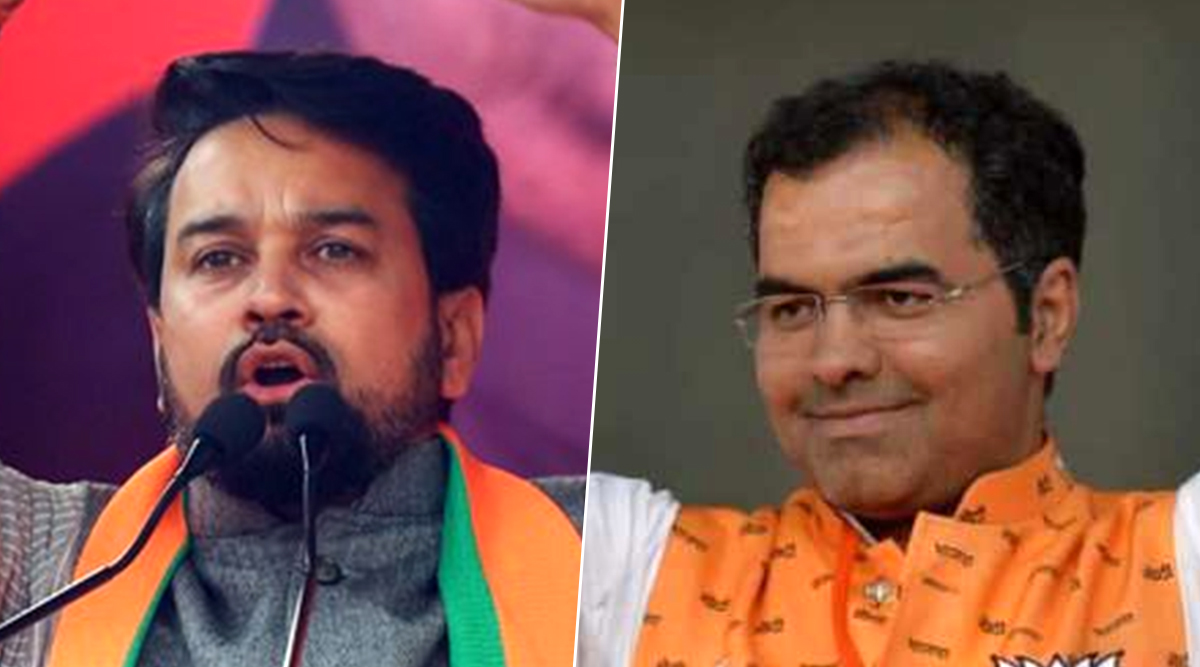 New Delhi, January 29: The Election Commission on Wednesday ordered the removal of senior BJP leaders Anurag Thakur and Parvesh Singh Verma from the list of party's state campaigners for Delhi assembly elections 2020. The action was taken on the polling body after receiving a strongly-worded complaint from the Congress, accusing Thakur and Verma of stoking communal hatred to polarise the voters on religious lines.

Verma, while addressing a meeting of party workers on Wednesday, said he would ensure all mosques built on government land in his constituency would be removed after the BJP comes to power. "I will get all of them, all the mosques removed from government lands in my constituency after February 11," he said. Goli Maaro Remark Row: 'See Mood of Delhi', Says Anurag Thakur in Defence.

In another video, the West Delhi Lok Sabha MP was seen referring to the Shaheen Bagh protesters as "rapists and murderers". He said a section of Delhi would meet the fate of Kashmiri Pandits if the BJP is defeated in the assembly elections.

"They (Shaheen Bagh protesters) will enter your houses and rape your sisters and daughters," he warned. "(Prime Minister Narendra) Modi ji and (Home Minister) Amit Shah ji can save you today. Tomorrow no one will be there. Delhi must think and vote wisely," he said.

Election Commission of India: EC has ordered removal of Anurag Thakur & Parvesh Sahib Singh Verma from the list of star campaigners of BJP for #DelhiElections with immediate effect & until further notice. pic.twitter.com/LXAXePyAnn

Thakur had landed in row on Tuesday, when he made the crowd of BJP supporters and workers raise a controversial slogan during a public meeting. The Union Minister shouted "desh ke in gaddaro ko (the traitors of this country)" and the crowd replied, "goli maaro ***** ko (shoot the *****)".

The Commission, which took cognisance of both the cases, had dispatched show cause notices. Verma remained vehement on his speech, saying that if "awakening the Hindu community" is a crime, he "will continue to do it". Thakur, on the other hand, denied violating the poll code. "First see the entire video...understand the sentiment of people of Delhi," he told reporters.