Union Petroleum Minister Dharmendra Pradhan said that the GST Council will have to take a decision on whether petrol and diesel prices should come under the ambit of GST. 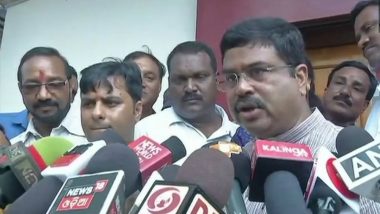 New Delhi, September 17: Union Petroleum Minister Dharmendra Pradhan has said that he wants petrol and diesel prices to come under the ambit of the Goods and Services Tax (GST). The minister said that the GST Council should take a decision on the matter and added that "State governments are more powerful than Centre in GST Council meeting."

Petroleum minister Dharmendra Pradhan, talking about fuel prices in state of Odisha, requested Odisha Chief Minister Naveen Patnaik to reduce the Value Added Tax (VAT) on petrol and diesel "like other state governments." The minister claimed that the Central government had already deducted excise duty on petrol and diesel a few months ago. Petrol Price Goes Beyond Rs 82 in Delhi, Nears Rs 90 Mark in Mumbai as Fuel Rates Continue to Soar.

Hitting a new high on Monday, petrol prices crossed the Rs 90 mark in 12 cities of Maharashtra. In the national capital, petrol is being sold at Rs 82.06 per litre. The prices of petrol and diesel have been witnessing an upward rise since August 1. Will Petrol Prices Reach Rs 100 Mark? Thanks to Pump Machines, Fuel Rates Can't Be Raised Above Rs 99.99/Litre!

Premium petrol, called 99 Octane, is sold Rs 20 more than the cost of regular petrol. Recently, the price of 99 Octane crossed Rs 100 mark, and it was being sold at Rs 100.33 for a litre. Petrol Prices Cross Rs 90 Mark in 12 Cities of Maharashtra, Check List of Places Where Fuel Rates Are Highest.

(The above story first appeared on LatestLY on Sep 17, 2018 04:55 PM IST. For more news and updates on politics, world, sports, entertainment and lifestyle, log on to our website latestly.com).