Goa Assembly Elections 2022: A Look Back at The Polling, Alliances And Results of 2017 Election Ahead of Vidhan Sabha Polls 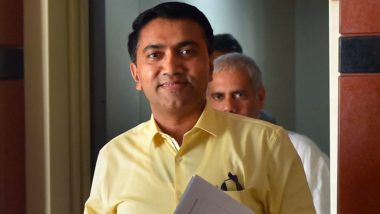 In 2017, the Goa Assembly Elections were held in a single phase on February 4. After sweeping Uttar Pradesh and Uttarakhand, and having won 21 seats in the 2012 Assembly Elections, BJP anticipated gorgeous results in 2017 as well, however, their chances looked bleak as Congress clinched 17 seats and emerged as the largest party in Goa Assembly Elections 2017. BJP only managed bag 13 constituencies, which was way below their expectations. It looked like Congress was all set to prove the majority and form the government in the state, but the BJP moved faster and formed the government with regional allies like the Goa Forward Party (GFP) and Maharashtrawadi Gomantak Party (MGP) and 3 independent winners. Goa Assembly Elections 2022: Congress Candidates Take Pledge To Not Quit Party After Polls.

Defence Minister Manohar Parrikar took oath as Chief Minister of Goa in 2017. However, following the demise of CM Manohar Parrikar, Pramod Sawant took charge of the state in 2019. Goa Assembly Elections of 2017 saw the rise of underdogs and the fall of star candidates. Former chief minister Laxmikant Parsekar lost to Congress' Dayanand Sopte. BJP's Rajendra Arlekar also failed in the elections, while Ravi Sitaram Naik, Digambar Vasant Kamat, and Luizinho Faleiro of Congress performed as per party expected from them.

Goa Assembly Elections 2022 will be a tight competition as the many leaders changed parties before the polls. This election, BJP, Congress-GFP alliance, Aam Aadmi Party, and TMC- MGP alliances are in the fray. Parties like NCP and Shiv Sena are also in the fray. BJP, however, faced a blow as they did not offer the ticket to former CM Manohar Parrikar's son Utpal Parrikar, resulting in the latter quitting the party. Uttar Pradesh Assembly Elections 2022: A Look Back at The Polling, Alliances And Results of 2017 Election Ahead of Vidhan Sabha Polls.

As per the Election Commission, Goa will have 1,722 polling stations in the elections. A total of 11,56,762 voters are eligible to cast their ballots in the upcoming assembly polls.

(The above story first appeared on LatestLY on Jan 24, 2022 07:33 PM IST. For more news and updates on politics, world, sports, entertainment and lifestyle, log on to our website latestly.com).