Uttar Pradesh Assembly Elections 2022: A Look Back at The Polling, Alliances And Results of 2017 Election Ahead of Vidhan Sabha Polls

As the state gears up for the 2022 Uttar Pradesh assembly elections, all the parties are aware of the likely impact that the results of these polls could have on the 2024 Lok Sabha elections. 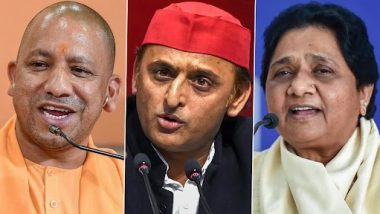 BJP's Yogi Adityanath, Samajwadi Party's Akhilesh Yadav and BSP's Mayawati will face one of the toughest political challenges of their lives in the 2022 Assembly Elections (Photo Credits: PTI)

The stage is set for the assembly elections in Uttar Pradesh after the election commission announced a seven phase poll schedule for the state. With weeks left before the state goes to polls, let us take a look at the 2017 UP assembly elections.

In the 2017 assembly elections, the BJP alliance had registered a historic victory while the alliance of SP and Congress failed to get much support from the voters.  Meet Dharmendra Pratap Singh, India’s ‘Tallest’ Man, Who Recently Joined Samajwadi Party Ahead of Uttar Pradesh Assembly Elections 2022

During the 2017 assembly elections, the NDA alliance i.e. BJP Plus got a total of 325 seats. Out of this, BJP which had fielded its candidates on 384 seats, won 312 seats. The Other two parties of BJP alliance, Apna Dal (Sonelal) won nine seats out of 11 seats and Bharatiya Suheldev Samaj Party won four out of eight seats.

In 2017 elections, the BJP had scripted a historic victory in the state - winning 312 assembly seats with a vote share of nearly 40 per cent.

This was the BJP’s best performance in Uttar Pradesh since it got into the electoral fray in the state in 1980.

The party not just won the maximum number of seats, it also registered its best-ever vote share and the best strike rate in the state.

Apart from these two alliances, the Bahujan Samajwadi Party also performed poorly winning only 19 seats out of 403 seats. Many senior leaders of the BSP suffered defeat in the elections. Apart from this, RLD which is in alliance with SP this time won only one seat in the 2017 assembly elections. At the same time, a total of six seats, including three independent candidates, went to the account of others.   Uttar Pradesh Assembly Elections 2022: Yogi Adityanath Slams Congress, SP, BSP, Says ‘They Didn’t Help Common People During COVID-19 Crisis’

According to the Election Commission of India, the total number of eligible voters in the UP Assembly elections is 15.06 crore

Now, as the state gears up for the 2022 Uttar Pradesh assembly elections, all the parties are aware of the likely impact that the results of these polls could have on the 2024 Lok Sabha elections.

(The above story first appeared on LatestLY on Jan 24, 2022 02:35 PM IST. For more news and updates on politics, world, sports, entertainment and lifestyle, log on to our website latestly.com).