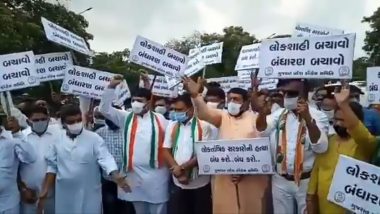 Ahmedabad, July 27: Nearly 60 Congress workers and leaders were detained by police Monday when they marched towards the Raj Bhavan in Gandhinagar to protest against the BJP over the political crisis in Rajasthan. Gujarat Congress president Amit Chavda and Leader of Opposition in the state Assembly Paresh Dhanani were among those detained.

The march was part of the Congress's nation-wide call for agitation to protect the Constitution and democracy and to show solidarity with the Ashok Gehlot government in Rajasthan. Before they were detained, Congress workers and leaders marched towards the Raj Bhavan in the Gujarat capital holding banners with the message "Save Democracy-Save Constitution," and shouted slogans against the BJP. Rajasthan Political Crisis: As Sachin Pilot Revolts, Congress Summons MLAs, Says 'Ashok Gehlot Has Support of 109 Legislators'; Here's The Number Game.

"We detained nearly 60 Congress workers and leaders as they did not have the permission to hold the protest," Gandhinagar Superintendent of Police Mayur Chavda said. Talking to reporters ahead of the march, Gujarat Congress president Amit Chavda accused the BJP central leadership of "murdering democracy and insulting the public mandate by dismantling democratically elected governments in its hunger for power."

The Rajasthan Congress government, which is facing a political crisis after a rebellion by the now sacked deputy chief minister Sachin Pilot and 18 other dissident MLAs, says it wants to hold the session so that it can prove its majority.

Gehlot has alleged that the governor is facing pressure "from above" to stall the Assembly from meeting, hinting at the alleged involvement of the BJP government at the Centre in the tussle for power in the state. Mishra has denied the charge.