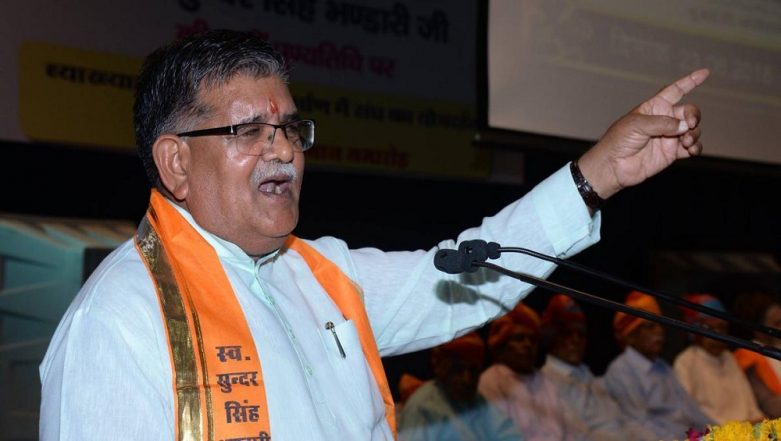 Jaipur, January 13: The Bharatiya Janata Party (BJP) legislators on Sunday elected Gulab Chand Kataria as the Leader of Opposition in the Rajasthan Assembly. The decision was taken almost a month after the state voted out the incumbent Vasundhara Raje-led BJP government in the high-stake elections.

Kataria, 74, was the Home Minister in the last government in the state, which has now been replaced by the Ashok Gehlot-led Congress regime. Meanwhile, Raje was recently assigned a central role, being appointed as the BJP's national vice president. Assembly Bypolls in Rajasthan's Ramgarh Constituency to be Held on January 28.

Among frontrunners for the LoP post included former parliamentary affairs minister Rajendra Rathore and ex-assembly speaker Kailash. The party high command, however, decided to assign the crucial charge to Kataria.

Kataria, a veteran politician from Udaipur, is currently serving his eight term as a legislator in the Rajasthan assembly. He was also elected once to Lok Sabha, in 1989.

Reports claimed that the BJP leadership was recommended by the Rashtriya Swayamsevak Sangh (RSS) to not to appoint Raje as the LoP, as it could be detrimental to the party's prospects in the upcoming Lok Sabha elections.

Ahead of the recently held assembly polls, sections within the Rajasthan unit of BJP had demanded the high command to not to project Raje as the chief ministerial face -- due to the apparent anti-incumbency factor against her. The party, however, decided to fight the polls under her leadership.