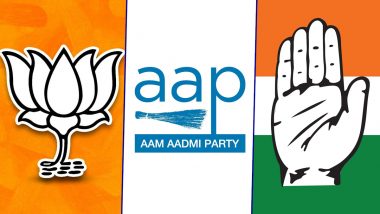 The Congress wrested power from the BJP in Himachal Pradesh, winning 39 out of 68 assembly seats. The BJP was reduced to 26 seats. There are three seats from where independent candidates were elected. The election to the 68-member Himachal Pradesh assembly took place on November 12. The hill state witnessed over 75 percent voter turnout. There are 412 candidates in the fray, including 24 women. All three major parties - BJP, Congress and AAP - contested all 68 seats. Below is the list of leading/winning candidates of the BJP, Congress and AAP.

In 2017, the BJP had won 44 seats in Himachal Pradesh and wrested power from the Congress party. The Congress had lost power and could win just 21 seats. One CPI(M) candidate and two Independents were also elected.

(The above story first appeared on LatestLY on Dec 08, 2022 08:32 AM IST. For more news and updates on politics, world, sports, entertainment and lifestyle, log on to our website latestly.com).