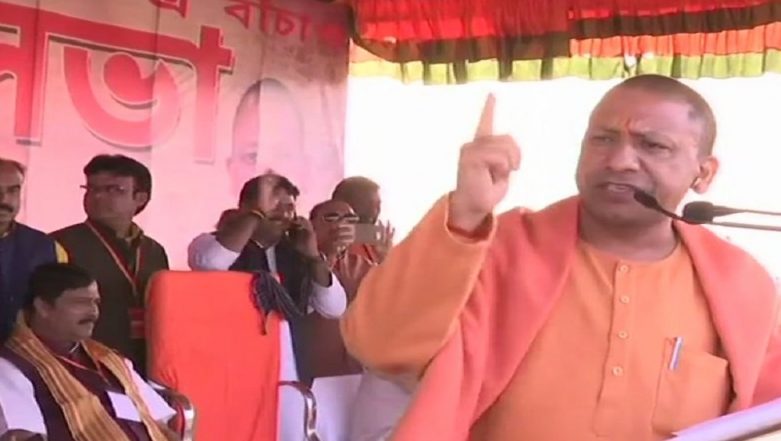 Gorakhpur, February 10: Uttar Pradesh Chief Minister Yogi Adityanath has warned of stern action against all those found involved in illicit liquor trade even if they were associated with any political party. "In past too such type of mischievous acts by SP leaders had come to fore. In c, Hardoi Kanpur and Barabanki SP leaders were found to be involved in past hooch tragedies. We can't deny conspiracy this time too," Yogi said here on Saturday night.

He was responding to queries of reporters after attending meeting with MPs and MLAs to review preparations for Prime Minister Narendra Modi and BJP national president Amit Shah's visit on February 23 and 24 to attend 'Kisan Adhiveshan'. The CM said he had spoken to Chief Minister of Uttrakhand and asked for sharing details as the spurious liquor was served to natives of Uttar Pradesh in a Haridwar village where they had gone to attend a programme. Hooch Tragedy in Uttar Pradesh, Uttarakhand: Spurious Liquor Kills Over Two Dozen People.

"A racket of spurious liquor was being operated there in Uttrakhand therefore I have spoken to CM seeking details over it," he said. He said the action has been taken against excise officer, excise inspector, SHOs and beat constables in and Saharanpur and Kushinagar. Taking serious note of the deaths due to spurious liquor in Kushinagar as well as Saharanpur districts, the state government has ordered a 15-day joint drive by excise and police officials against those involved.

The UP government has announced an ex-gratia of Rs 2 lakh for the next of kin of the deceased and help of Rs 50,000 each for those undergoing treatment in hospitals. Over 60 people have died in the hooch tragedy that hit two adjoining districts in Uttarakhand and Uttar Pradesh with more people dying of the spurious liquor they drank at a Haridwar village, officials said. More than 20 victims died in Balupur and its neighbouring villages in Haridwar district and around 40 had died in UP's Saharanpur district. In an unrelated incident, nine people have died over the week in eastern Uttar Pradesh's Kushinagar district, allegedly after drinking spurious liquor.