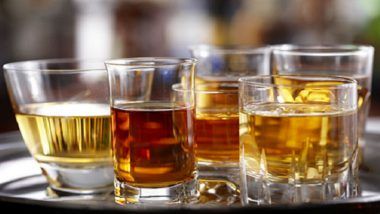 Five people died in Saharanpur's Umahi village on Friday and 10 people were hospitalised in serious condition. Locals said that they had consumed spurious liquor. A similar incident took place in Sharbatpur village where three people were killed. Reports said at least 16 people have died so far. Liquor Sales Rose by 10 Per Cent in 2018 After Two Consecutive Years of Fall.

In the neighbouring state of Uttarakhand, 12 people died allegedly after consuming homemade illicit liquor at Roorkee in Haridwar district. They had consumed spurious liquor during a funeral procession in a village on Thursday, officials told News18.

Yogi Adityanath also asked DGP to take stock of the situation and fix responsibility of the police in two districts where several deaths due to spurious liquor were reported. He announced a compensation of Rs two lakh each to the kin of the deceased and Rs 50,000 each to the victims.

In Uttarakhand, 13 excise officials were suspended in connection with hooch tragedy. "We have suspended 13 employees of the enforcement team for negligence after 12 people died in the twin villages," deputy excise commissioner was quoted as saying.

"People from three to four villages on the border of Haridwar and Saharanpur gathered on Thursday for a terahvi (ceremony conducted to mark the final day of mourning after a death). It seems they had country-made liquor after the ceremony, which led to their death," Ashok Kumar, director general (DG) law and order, told TOI.

(The above story first appeared on LatestLY on Feb 08, 2019 01:57 PM IST. For more news and updates on politics, world, sports, entertainment and lifestyle, log on to our website latestly.com).