Popular Front of India (PFI) has lodged a complaint against air gun training to more than 100 participants during a week-long training camp held recently in Karnataka's Madikeri district, police said on Tuesday. 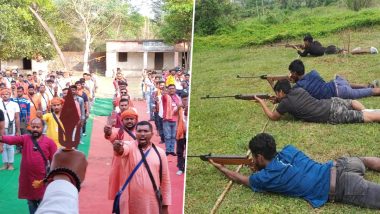 Bengaluru, May 17: Popular Front of India (PFI) has lodged a complaint against air gun training to more than 100 participants during a week-long training camp held recently in Karnataka's Madikeri district, police said on Tuesday.

Ibrahim, a member of PFI, has lodged a complaint and demanded a probe into the matter. The complaint mentioned that air guns were used in the camp held in the school grounds in Ponnampet town. Karnataka: Bajrang Dal Activist Killed in Shivamogga; Security Beefed Up, Schools, Colleges Closed for Two Days

The police have initiated a probe into the matter and sought a report from the Education department on whether the school grounds could be used for such an event.

The issue has stirred a controversy in the state and resulted in a political slugfest between ruling BJP and opposition parties. Chief Minister Basavaraj Bommai has stated that his government will not allow anything which happens illegally.

Responding to the allegations, National General Secretary and BJP MLA C.T Ravi claimed that the camp was a part of a self-defence course. They were not trained in using AK-47's and bombs. Every year, the Bajrang Dal trains its activists for self-defence.

Sri Ram Sena Founder Pramod Muthalik also defended the camp saying there is nothing wrong in giving training for self-defense.

The training camp was organised from May 5 to 11. The participants took part in a procession in the Ponnampet town on May 10. Bajrang Dal maintained that it had not violated law and the Arms Act. Air guns and tridents do not come under the act. However, police stated that they are looking into the issue of use of air guns in the open.

Karnataka Congress has demanded the arrest of Bajrang Dal leaders for giving arms training to young students in the school premises in Madikeri district.

Opposition party leader Siddaramaiah had stated that "by giving arms training in Madikeri to young members, Bajrang Dal has challenged the law of our land. Do we have a Home minister or Education minister in Karnataka? Is the government still alive?" Siddaramaiah questioned.

"MLAs M.P. Appachu, K.G. Bopaiah and Suja Kushalappa participated in the Shaurya Prashikshana Varga event of Bajrang Dal. Do they have any commitment towards our Constitution?" he asked.

Arms training is against the law and the Home Minister should file a case against the leaders of Bajrang Dal and arrest them, he demanded.

(The above story first appeared on LatestLY on May 17, 2022 11:10 AM IST. For more news and updates on politics, world, sports, entertainment and lifestyle, log on to our website latestly.com).