Katihar (Vidhan Sabha constituency) is an assembly constituency in Katihar district in the Indian state of Bihar. The voting in Kaihar constituency will be held on November 7 in the third phase of Bihar Assembly Elections 2020. 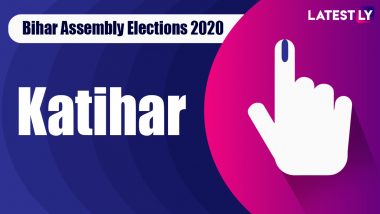 Polling began at 7 am and continued till 6 pm this time amid the coronavirus pandemic. One hour was added extra to allow social distancing and avoid overcrowding in polling booths. The last hour was kept for COVID-19 infected patients so that even they could cast their vote. Kadwa Vidhan Sabha Seat in Bihar Assembly Elections 2020: Candidates, MLA, Schedule And Result Date.

In the 2015 Bihar Assembly election, the Katihar constituency was won by Tarkishore Prasad of BJP, and Bijay Singh of JD (U) was the runner-up. The Bihar assembly elections 2020 took place in three phases this time. The dates were October 28, November 3 and November 7. The Bihar election is one of the biggest elections to be held globally during the COVID-19 pandemic. The counting of votes was held on November 10 and the results were also be declared on the same day.

Rashtriya Janata Dal got 80 seats in the 2015 Assembly elections, while Janata Dal (United ) managed to win 71 seats. Bharatiya Janata Party won 53 seats and Congress won 27 seats. In 2020 Elections, Congres is contesting on 70 seats. RJD would be fielding its candidates on 144 constituencies, and the Left Front comprising of CPI, CPI(M) and CPI-ML would be fielding their candidates in 29 assembly seats.

(The above story first appeared on LatestLY on Nov 12, 2020 10:58 PM IST. For more news and updates on politics, world, sports, entertainment and lifestyle, log on to our website latestly.com).