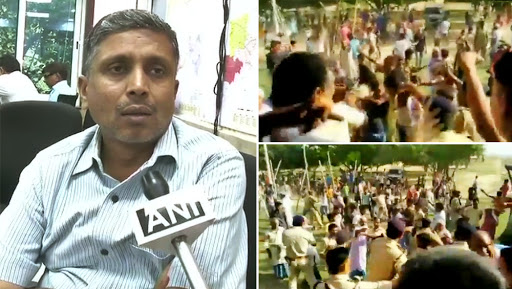 Patna, May 12: With the conclusion of Phase 6 of Lok Sabha Elections, a worrisome picture is arriving from Narkatiaganj in Bihar where BJP candidate from West Champaran Parliamentary constituency - Sanjay Jaiswal - was allegedly attacked with sticks. The incident took place outside the polling booth no. 162 and 163. Jaiswal is unhurt. Meanwhile, EC had assured that it will look into the matter.

According to the reports, the BJP candidate was gheraoed by the people and an alleged attempt was made to attack him on Sunday. Jaiswal alleged that people even pelted stones at him and attacked his vehicle. He accused that even after reporting the incident, no security was provided to him by the administration. EC Orders FIR Against BJP's Ghatal Candidate Bharati Ghosh for Poll Violation During Phase 6 of Lok Sabha Elections 2019.

#WATCH: Narkatiaganj: An attempt was made to attack Sanjay Jaiswal (in red kurta), BJP candidate from West Champaran Parliamentary Constituency, with sticks outside polling booth no. 162, 163. He is unhurt. #Bihar #LokSabhaElections2019 pic.twitter.com/sxL3YWyAT7

However, Bihar Chief Electoral Officer HR Srinivasa has another take on the issue. He said, "An instigating speech was made after which situation got heated. Police immediately intervened, now everything is going on peacefully. I'll take a report. There were sticks in some people's hands, MP's bodyguard had also fired in the air."