A total of 3.11 crore voters are eligible to exercise their franchise in this phase of Lok Sabha polls in the state. 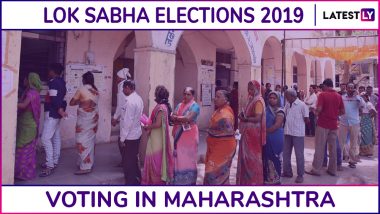 For the 17 Lok Sabha seats in Maharashtra, 323 candidates were in the fray. A total of 3.11 crore voters were eligible to exercise their franchise in this phase of Lok Sabha polls in the state. The ruling Bharatiya Janata Party (BJP) has formed an alliance with the Shiv Sena, where the Congress and the Nationalist Congress Party (NCP) are contesting polls together. Of the 17 seats going to polls today, eight seats were won by the BJP in the 2014 elections. Check Full Schedule of Lok Sabha Polls 2019.

The remaining nine seats went to the Shiv Sena in the previous Lok Sabha polls. However, this time a neck-and-neck electoral battle is expected between the BJP-Shiv Sena alliance and the Congress-NCP combine. Of the 48 Lok Sabha seats in the state, 31 went to polls in three phases of Lok Sabha elections on April 11, April 18 and April 23. The BJP-Shiv Sena combine bagged 41 seats in the 2014 Lok Sabha polls. The Congress won only two seats and NCP just four. Lok Sabha Elections 2019 Phase 4: Six Key Electoral Battles to Watch Out in This Round of Polls.

In Palghar Lok Sabha seat, the electoral contest is between Bahujan Vikas Aghadi (BVA)'s Baliram S Jadhav, who is also backed by the Congress-NCP alliance, and Shiv Sena's Rajendra Gavit. The constituency has a total electorate of 15,78,077, comprising 8,30,432 men and 7,47,645 women. In Bhiwandi, Congress's Suresh Taware will lock horns again with BJP's Kapil Patil. The constituency has 16,96,598 voters, including 9,45,405 males and 7,51,184 females.

The Mumbai North East seat will see a contest between BJP's Manoj Kotak and NCP's former MP Sanjay Dina Patil. The constituency has total 16,68,347 voters comprising 9,23,011 males and 7,45,342 females. In Mumbai North West, the Shiv Sena has renominated its sitting MP Gajanan C Kirtikar who will be challenged by former Mumbai Congress President Sanjay Nirupam. The constituency has an electorate of 17,75,428 including 9,86,908 men and 7,88,520 women.

The Mumbai North Central Lok Sabha seat is witnessing an electoral fight between BJP MP Poonam Mahajan and three-time MP Priya Dutt of the Congress. The constituency has 17,38,894 voters comprising 9,67,474 males and 7,71,420 females. In Mumbai South Centra, Shiv Sena's sitting MP Rahul Shewale will lock horns with Congress's Eknath Gaikwad. The constituency has an electorate of 14,47,885 including 7,93,801 men and 6,54,084 women.

In Shirdi Lok Sabha seat, Shiv Sena has fielded its sitting Member of Parliament (MP) Bhausaheb Kamble. Kamble will face a tough challenge from Sadashiv Lokhande of the Congress. The Dhule Lok Sabha seat will witness an electoral contest between BJP's Dr Subhash Bhamre and Kunal Rohidas Patil of the Congress. In Nandurbar, the BJP renominated its sitting MP Heena Vijaykumar Gavit. The Congress has declared KC Padavi as its candidate.

(The above story first appeared on LatestLY on Apr 29, 2019 11:19 PM IST. For more news and updates on politics, world, sports, entertainment and lifestyle, log on to our website latestly.com).