Mamata Banerjee Lashes Out at BJP for Questioning Her Religion, Says ‘My Religion Is Humanity’ 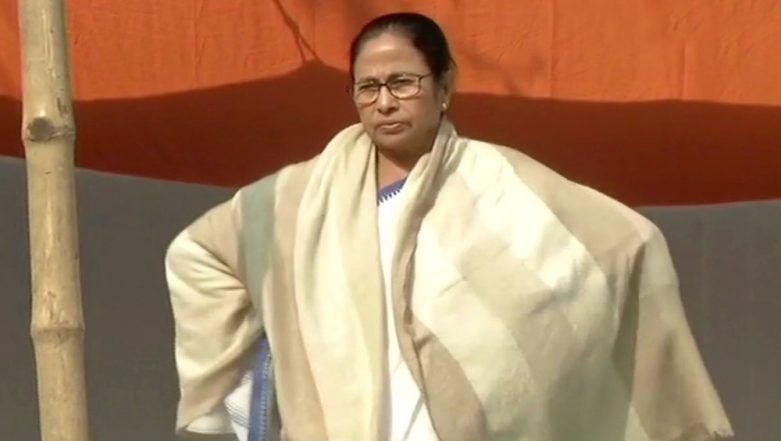 Kolkata, March 19: West Bengal Chief Minister Mamata Banerjee Tuesday lashed out at the BJP for questioning her religion and said neither she nor the people of the state need to learn the meaning of 'communal harmony' from the "divisive BJP". "There are people who question my religion. I want to tell them that my religion is humanity and I do not need lectures from others about religion," she said at a programme here in connection with the upcoming Holi festival.

"They (BJP) try to point fingers at me and say I do not allow puja to be conducted in Bengal. They should go and see how many 'mandir' (temples) have been constructed during the TMC regime," the Trinamool Congress supremo said. The BJP had often questioned her religion and accused her of following the politics of appeasement. Continuing to hit out at the saffron party, Banerjee, who is among its harshest critics, said she believed in playing Holi with colours "unlike some sections (BJP) which believe in paying with blood". Mamata Banerjee Challenges Narendra Modi And Amit Shah For Sanskrit Mantras Competition.

"I believe in playing Holi with colours and a pure mind unlike a section which believes in playing Holi with the blood of others. I do not need to learn the meaning of communal harmony from a divisive force like the BJP," she said. Banerjee called for maintaining communal harmony on the days of 'Doljatra' (as the festival of colours is known in Bengal) and Holi, and cautioned people to be on guard against any effort to disturb peace.