The Mamata Banerjee government has not reacted on the news of Centre asking for a report from the West Bengal Government on the tent collapse, so far. 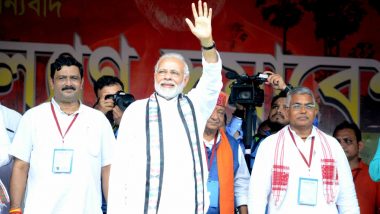 New Delhi, July 16: The Centre has sought a report from the West Bengal Government on the tent collapse incident in Midnapore during Prime Minister Narendra Modi's rally in which over 60 people have been injured. The incident happened today afternoon when Prime Minister was addressing the rally in  Midnapore.

The collapse happened while PM Modi was addressing people from the stage. When the portion collapsed, PM Modi asked a Special Protection Group (SPG) personnel, deployed for his security, to helo those who got injured.

Immidiately after the incident, he instructed an SPG personnel to look after the people and attend to any injured. PM Modi later visited the injured in the hospital and enquired about the condition of those who were hurt.

West Bengal Chief Minister Mamata Banerjee had said that the state government was providing all possible help to the victims. "We pray for the speedy recovery of all those injured at the Midnapore rally. The government is giving all help for medical treatment," she said.

In the rally, Modi launched a blistering attack on the Mamata Banerjee-led West Bengal government. The Prime Minister Narendra Modi on Monday accused it of forming a nexus with the "all-pervading syndicates", murdering Dalit political activists and having no faith in democracy, the Indian constitution or the electoral process.

In one of his strongest tirades against the Trinamool Congress government, he told a rally here that none of the forces which perpetrated atrocities in Bengal in the past were spared, and prophesied that the "state will be freed of all crimes and corruptions within months and it is just a matter of an opportunity".

"Those who do not support democracy, do not believe in the process of election, follow the Constitution and the Government that has to be reprimanded by High Court and Supreme Court, should be careful. This is Bengal, none of them will be spared," said the Prime Minister, who started his speech in Bengali amid tumultuous applause and high-decibel chants of "Modi, Modi". The Mamata Banerjee government has not reacted on the news of Centre asking for a report from the West Bengal Government on the tent collapse, so far. (With Agency Inputs)

(The above story first appeared on LatestLY on Jul 16, 2018 10:11 PM IST. For more news and updates on politics, world, sports, entertainment and lifestyle, log on to our website latestly.com).