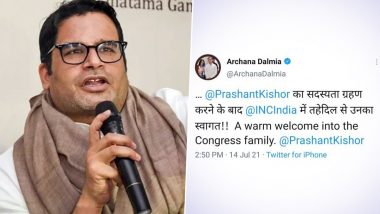 New Delhi, July 14: Congress leader Archana Dalmia on Wednesday tweeted that poll strategist Prashant Kishor had joined the grand old party. Her tweet welcoming Prashant Kishor into Congress was deleted minutes later. Archana Dalmia, who is considered a close aide of Rahul Gandhi, has not clarified on her now-deleted tweet so far. Her tweet came amid reports that Kishor may join the Congress party.

"A warm welcome into the Congress family," Dalmia tweeted, adding that Kishor had taken membership of the party. The poll strategist was also tagged in her tweet. However, a few minutes later, the tweet disappeared. Her tweet came a day after Kishor met Congress interim chief Sonia Gandhi, Rahul Gandhi and Priyanka Gandhi Vadra. There is no official word regarding the meeting, at which Congress General Secretary KC Venugopal was also present.

A section of media reported that Kishor, who has been advising Punjab Chief Minister Captain Amarinder Singh on key political issues, discussed the ongoing crisis in the Congress party's state unit surrounding Navjot Singh Sidhu. However, a report by NDTV said Kishor's meeting with the Gandhis was about "something bigger".

According to the report, the Gandhis and Prashant Kishor, during their talks, may have explored a formal role for the strategist in the party as it prepares big elections ahead, state and national.

(The above story first appeared on LatestLY on Jul 14, 2021 05:26 PM IST. For more news and updates on politics, world, sports, entertainment and lifestyle, log on to our website latestly.com).