Polling will be held on May 19 in Punjab and the results of Lok Sabha elections 2019 will be declared on May 23. 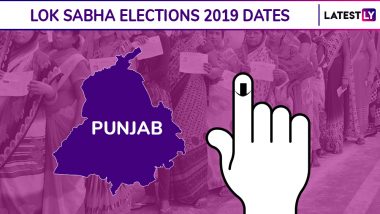 The Bharatiya Janata Party has forged a pre-poll alliance with its long-time ally Shiromani Akali Dal (SAD) in Punjab. Of the 13 Lok Sabha seats in the state, the SAD will field candidates in 10 and the BJP, the remaining three. The BJP-SAD alliance will be challenged by the ruling Congress and the Aam Aadmi Party (AAP). In 2014 Lok Sabha elections, SAD won four out of the 10 seats it contested, while the BJP won two out of the three. Jammu And Kashmir Lok Sabha Elections 2019 Dates.

The Congress bagged three seats, while the AAP surprised everyone with the victory over four seats. Unlike in other states where the BJP-led NDA had stunning victory in 2014 general elections, the saffron party and its ally SAD failed to replicate the success in Punjab where they have been in power for the past seven years. The BJP-SAD alliance also suffered defeat in the hand of Congress in 2017 assembly polls in the state.

(The above story first appeared on LatestLY on Mar 10, 2019 05:52 PM IST. For more news and updates on politics, world, sports, entertainment and lifestyle, log on to our website latestly.com).