As per the results for the Bihar assembly elections announced by the Election Commission today, RJD's Mohammad Nehaluddin was elected as an MLA from Rafiganj. 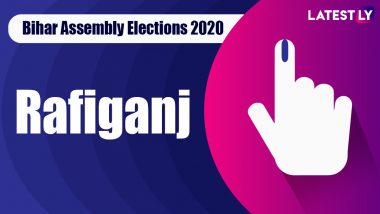 Patna, October 18: The Rafiganj Vidhan Sabha seat went to polls in the first phase of the Bihar assembly elections 2020. The electoral fight, in Rafiganj assembly constituency, was between the Janata Dal (United) and the Rashtriya Janata Dal (RJD). As per the results for the Bihar assembly elections announced by the Election Commission today, RJD's Mohammad Nehaluddin was elected as an MLA from Rafiganj. Bihar Assembly Elections 2020: RJD, Congress, Left Declare Candidates on 243 Seats; Check Full List of Names Here.

The Rafiganj seat is currently held by JD(U) MLA Ashok Kumar Singh who was renominated by the party. The RJD declared Mohammad Nehaluddin as its candidate. The JD(U) candidate had the support of the Bharatiya Janata Party (BJP) and two other regional outfits. Similarly, the RJD formed an alliance with the Congress and Left parties. Bihar Assembly Elections 2020 Dates And Schedule: Voting in 3 Phases on October 28, November 3 and 7, Poll Results on Nov 10.

For Rafiganj assembly seat, the last date of filing nomination papers was October 8. Nominations were scrutinised on October 9. The last date for withdrawal was October 12. The Bihar Assembly Elections 2020 took place in three phases - October 28, November 3 and November 7.

(The above story first appeared on LatestLY on Nov 10, 2020 09:15 PM IST. For more news and updates on politics, world, sports, entertainment and lifestyle, log on to our website latestly.com).