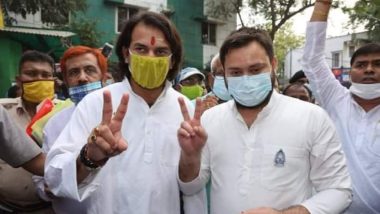 Sharad Yadav's daughter Subhashini Yadav will contest as Congress candidate from Bihariganj seat. As per the seat-sharing agreement, the RJD will contest 121 seats, Congress 70 and Left parties have been allotted 29 seats. Out of the Left Front's share, the maximum was allotted to CPI-ML, which will field candidates on 19 seats. The CPI(M) and CPI will contest from 4 and 6 constituencies, respectively. BSP, RLSP to Fight Polls Together, Upendra Kushwaha to Be CM Candidate, Says Mayawati.

Mahagathbandhan including RJD, Congress and left parties releases its list of candidates for all 243 Assembly seats in Bihar.#BiharElections pic.twitter.com/ljB7MuzZDp

As per the seat-sharing agreement between parties of the ruling alliance, the Bharatiya Janata Party (BJP) will fight on 121 seats out of the 243 Bihar constituencies while Chief Minister Nitish Kumar's JD(U) will contest 122 seats. The Nitish Kumar-led party will accommodate the Hindustani Awam Morcha (HAM) and the BJP will accommodate the Vikassheel Insaan Party (VIP).

The elections for 243 Assembly seats will be held in three phases - for 71 seats on October 28, for 94 seats on November 3, and remaining 78 on November 7. The results will be announced on November 10.

(The above story first appeared on LatestLY on Oct 15, 2020 08:54 PM IST. For more news and updates on politics, world, sports, entertainment and lifestyle, log on to our website latestly.com).