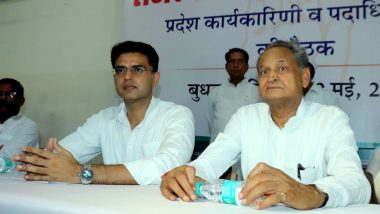 Jaipur, July 12: Rajasthan Deputy Chief Minister Sachin Pilot, at centre of the current political storm in the state, would not be attending the legislative party meeting called by Chief Minister Ashok Gehlot tomorrow. The meeting is scheduled at 10:30 am tomorrow in Jaipur, and a whip has been issued to all Congress legislators to attend.

Close aides of Pilot, while speaking to reporters, said that their leader has confirmed to the party top brass that he would not be participating in the meeting called by Gehlot. Rajasthan to Go MP Way? Govt on Shaky Grounds Amid 'Gehlot-Pilot Power Tussle', All About The Political Crisis.

The sources claimed that the situation has reached a "point of no-return" for Pilot in the ongoing power tussle with Gehlot. The Congress leader himself was not available for comment and has remained incommunicado since the fresh row with Gehlot erupted.

According to sources linked to news agency ANI, a total of 30 Congress MLA and a few independents would back Pilot in the decision he takes. The options before them also includes a switchover to the Bharatiya Janata Party (BJP).

BJP state unit chief Satish Poonia, while speaking to reporters on Saturday, said the party has no role in the current crisis which has erupted in the government. "We are not behind this. We are only waiting and watching. The Gehlot government will fall of its own misdeeds," he said.

While tensions between Gehlot and Pilot have been brewing since the rout of party in 2019 general elections, the crisis reached a triggering point after the Rajasthan Police arrested two BJP leaders - Ashok Singh and Bharat Malani - for allegedly attempting to lure away Congress MLAs by offering Rs 20-25 crore on behalf of the party.

In the FIR registered by the Special Operation Group of Rajasthan Police, the call intercepts between the accused BJP leaders and suspected Congress legislators showed them discussing the "fight between CM and Deputy CM".

"...BJP says that CM will be our person and Deputy CM will be made a minister in the central government while the Deputy CM says that he will be the CM – this has also appeared in the conversations," one of the call intercept as quoted in the FIR was reported as stating by The Indian Express.

Reacting to the political developments in Rajasthan, Pilot's former contemporary Jyotiraditya Scindia - who recently jumped ship to the BJP to bring down the Kamal Nath-led Congress government in Madhya Pradesh - said the Congress does not value talent and capability.

"Sad to see my erstwhile colleague, Sachin Pilot too, being sidelined and persecuted by Rajasthan CM Ashok Gehlot. Shows that talent and capability find little credence in the Congress," he said.

(The above story first appeared on LatestLY on Jul 12, 2020 09:13 PM IST. For more news and updates on politics, world, sports, entertainment and lifestyle, log on to our website latestly.com).