Stepping up its investigation on the FIR filed by union minister Gajendra Singh Shekhawat in Rajasthan phone tapping case, the Delhi Crime Branch has issued a notice to Congress chief whip Mahesh Joshi and summoned him for interrogation on June 24 at Prashant Vihar office. 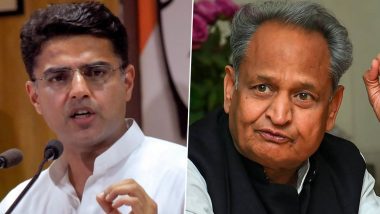 Jaipur, June 23: Stepping up its investigation on the FIR filed by union minister Gajendra Singh Shekhawat in Rajasthan phone tapping case, the Delhi Crime Branch has issued a notice to Congress chief whip Mahesh Joshi and summoned him for interrogation on June 24 at Prashant Vihar office.

The development comes in view of the intensified war between Sachin Pilot and chief minister Ashok Gehlot.  State Assembly Elections 2022: Yogi Adityanath to Be CM Face in UP, BJP’s Rajasthan CM Face to Be Decided by Party, Says Arun Singh

The notice has been issued by Delhi Crime Branch Inspector Satish Malik. However, Joshi told IANS that he has not yet read the notice and will revert after reading it by Wednesday afternoon.

Sachin Pilot in July last year had rebelled against chief minister Ashok Gehlot and had camped in a Haryana hotel accompanied by MLAs who supported him. It was during this period that the Rajasthan government was accused of phone tapping.

An FIR was registered by the Crime Branch of Delhi Police on March 25 after a complaint was lodged by union minister Gajendra Singh Shekhawat. In the FIR, Shekhawat had alleged that the state government is tapping phones of public representatives illegally.

Shekhawat has accused unknown police officers and Lokesh Sharma, the OSD of chief minister Ashok Gehlot in the FIR. The Delhi Crime Branch has now included the name of Mahesh Joshi in its investigation expanding its scope in this case.

Mahesh Joshi had filed an FIR in SOG and ACB on the basis of leaked phone calls after the political crisis escalated. Mahesh Joshi had also recorded his statement in ACB and SOG regarding this case.

Lokesh Sharma had recently moved the Delhi High Court with regard to the FIR lodged in the Crime Branch. The court gave the next hearing date on August 6 and asked the crime branch not to take any action till then.

Also, the case status report was sought from Delhi and Rajasthan Police.

Recently, pro-Pilot MLA Ved Solanki also gave a statement that the government is getting the phones of MLAs tapped. These MLAs have also informed CM Ashok Gehlot about the illegal tapping, he said.

(The above story first appeared on LatestLY on Jun 23, 2021 11:48 AM IST. For more news and updates on politics, world, sports, entertainment and lifestyle, log on to our website latestly.com).