Uttar Pradesh Assembly Elections 2022: From CM Yogi Adityanath to Chandrashekhar Azad Ravan, Here are the 7 Key Candidates In Upcoming Polls in UP

BJP is contesting the UP elections in alliance with Apna Dal and Nishad Party. Meanwhile, the SP formed an alliance with the Rashtriya Lok Dal, the Nationalist Congress Party, the Apna Dal (Kamerawadi), the Suheldev Bharatiya Samaj Party, and the Janwadi Party. 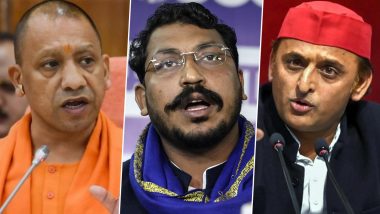 Here Are Seven Key Candidates in UP Assembly Elections 2022:

Chief Minister Yogi Adityanath: Uttar Pradesh CM Yogi Adityanath is one of the heavyweights in the battle. In this poll, he will be contesting from Gorakhpur Urban Assembly Constituency. He was sworn in as UP CM on March 19, 2017, after BJP achieved a landslide victory in Uttar Pradesh.

Akhilesh Yadav: Samajwadi Party (SP) president and former CM of UP Akhilesh Yadav is contesting the elections from his stronghold Karhal constituency. The voting in the Karhal constituency will take place on February 14, in the third phase of UP Assembly Elections 2022. In the 2012 Assembly Elections, his party had won 224 seats, following which he was sworn in as 20th CM of UP. The Agra-Lucknow Expressway was built during his tenure.

Chandrashekhar Azad Ravan: Chandrashekhar Azad Ravan is a lawyer and a Dalit-Bahujan rights activist. He is known for attacking the incumbent BJP governments, whether in the state or at centre. He had held a protest for the Hathras gang-rape victim, demanding strict actions against the culprit. He also had met with the rape victim's family and had demanded "Y-security" for them. Azad had also joined the protesting farmers at the Delhi-Ghazipur border demanding withdrawal of the new farm laws. In UP Assembly Elections 2022, Azad is contesting from the Gorakhpur Urban assembly seat against CM Yogi Adityanath.

Azam Khan: Azam Khan is contesting the upcoming assembly polls on SP's ticket from Rampur seat. Azam Khan has been MLA nine times from the seat. He completed his nomination process from the Sitapur jail where he is held on multiple criminal charges.

In Assembly Elections 2017, BJP is contesting the UP elections in alliance with Apna Dal and Nishad Party. Meanwhile, the SP formed an alliance with the Rashtriya Lok Dal, the Nationalist Congress Party, the Apna Dal (Kamerawadi), the Suheldev Bharatiya Samaj Party, and the Janwadi Party.

(The above story first appeared on LatestLY on Feb 04, 2022 05:25 PM IST. For more news and updates on politics, world, sports, entertainment and lifestyle, log on to our website latestly.com).