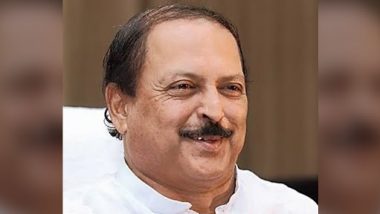 Kolkata, March 1: The ruling TMC in West Bengal claimed on Monday that BJP, which has so far "practised politics of caste and creed", has now found two friends in the CPI(M) and the Congress.

Senior TMC leader and state panchayat minister Subrata Mukherjee, during a press meet here, said the meeting on Sunday at the Brigade Parade Ground, called jointly by the Left, Congress and the newly-formed Indian Secular Front (ISF), has clearly established the fact that the two national parties are resorting to divisional politics, quite like the saffron camp, ahead of assembly elections. West Bengal Assembly Elections 2021 Dates: Polling in 8 Phases Between March 27 and April 29, Results on May 2; Check Full Schedule Here.

He, however, did cite any reason for levelling such allegation against the two parties. A decade after losing power in Bengal, the Left Front, in alliance with the Congress and the newly formed Indian Secular Front (ISF) of Muslim cleric Abbas Siddiqui, during a public meeting here on Sunday, projected itself as a "third alternative force" in the emerging TMC versus BJP political binary in the state.

The senior ruling camp leader, while addressing the reporters, also said that an election committee has been formed under the leadership of Mamata Banerjee to look into poll preparations.

The committee, which has MPs Sudip Bandopadhyay and Abhishek Banerjee among others as members, held its first meeting on Monday, he said. The panchayat minister also stated that various social welfare schemes launched by the state government, such as 'Swasthya Sathi, 'Khadya Sathi' and 'Kanyashree', have touched millions of lives in the state.

In the last one year, banks have extended loans amounting to Rs 63,000 crore to small and medium-sized enterprises, generating around 23 lakh jobs, he said.

"The schemes floated by the TMC government have no parallel anywhere in the country. No other state has been able to provide benefits at such massive scale," Mukherjee added.