The Election Commission on Tuesday said it has banned Bharatiya Janata Party (BJP) leader Rahul Sinha from campaigning for 48 hours in West Bengal where assembly elections are being held. 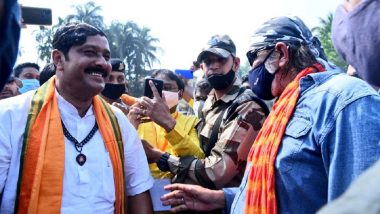 Kolkata, April 13: The Election Commission on Tuesday said it has banned Bharatiya Janata Party (BJP) leader Rahul Sinha from campaigning for 48 hours in West Bengal where assembly elections are being held. The EC's action came a day after Rahul Sinha said that the central forces, if deemed fit, could have shot dead more than four persons in the district in its bid to thwart attempts of vote rigging. 'Cooch Behar-Like Killings Possible If Naughty Boys Try to Take Law into Their Hands', Says West Bengal BJP Leader Dilip Ghosh.

Last week, four people were killed in Sitalkuchi in Cooch Behar when central forces opened fire after a mob allegedly attacked a polling booth. Justifying the firing, Sinha on Monday said that "the central forces, in its effort to stop rigging, could have shot dead more than four maybe seven or eight - if necessary". His is contesting from Habra constituency. His remarks drew sharp reactions from the Trinamool Congress and the Left.

West Bengal Chief Minister and TMC leader Mamata Banerjee condemned Sinha's statement and said leaders like him should be banned politically. Her party also approached the EC accusing BJP leaders of "instigating violence". CPI(M) candidate from Jadavpur Sujan Chakraborty said, "These comments reflect the fascist nature of the BJP. The poll panel should initiate action against these leaders for such irresponsible comments."

The EC also served a notice to West Bengal BJP chief Dilip Ghosh who had on Sunday said more Cooch Behar-like killings may happen in the next phase of assembly elections if "naughty boys like the ones who died in Sitalkuchi" try to take the law into their hands.

(The above story first appeared on LatestLY on Apr 13, 2021 01:14 PM IST. For more news and updates on politics, world, sports, entertainment and lifestyle, log on to our website latestly.com).