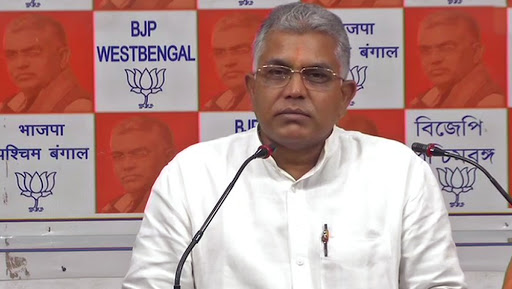 Kolkata, January 26: West Bengal BJP president Dilip Ghosh asserted on Sunday that all refugees will be given citizenship under the CAA, as party leader Rahul Sinha stoked a controversy by alleging that those protesting at Park Circus and Shaheen Bagh are "Bangladeshi Muslims".

Participating in a rally in support of the Citizenship (Amendment) Act (CAA) at Buniyadpur town in South Dinajpur district, Ghosh said that the refugees will now get their citizenship which they have been seeking for years. Anti-CAA Resolution Drafted by Over 150 European Union Lawmakers, Predict Indian Law May 'Create Largest Statelessness Crisis in The World'.

Claiming that TMC workers were intimidating people not to participate in NRC when it comes, Ghosh asserted that forms will have to be filled, whether offline or online.

"When we have passed the law (CAA), we will certainly give citizenship to each of the refugees. "How long will they oppose, if TMC workers try to stop the process, people of the state will protest," he said.

Rahul Sinha, a national secretary of the BJP, termed the people, who have congregated at Park Circus ground in the city and at Shaheen Bagh in Delhi to protest the CAA, NRC and the proposed NPR, as "Bangladeshi Muslims".

"Those sitting at Park Circus, and Shaheen Bagh are Bangladeshi Muslims," he said here. He alleged that these people had entered India illegally and were leading prosperous lives here. "Those who want to break the country are speaking from Shaheen Bagh," the BJP leader alleged.

Holding that BJP leaders like Rahul Sinha should refrain from making such irresponsible comments, Left Front chairman Biman Bose asked whether anyone standing up for upholding rights guaranteed in the Constitution can be termed as "anti-national".

Congress leader Adhir Chowdhury, who went to the Park Circus ground to express solidarity with the protesters during the day, said that whoever goes against the BJP are termed as "anti-nationals". "Since I have come to Park Circus, so I should also be an anti-national in their nomenclature," he said. CAA, NRC Cover Up For Escaping Questions on Unemployment, Finds India Today's Mood of the Nation Poll.

"The BJP is trying to divide people of the country on communal lines, but they did not realise that this will unite the country in opposing the CAA, NRC and the NPR," the Congress leader in Lok Sabha said. Critising Sinha for his remarks, West Bengal minister Chandrima Bhattacharya said anyone against the BJP is being termed as "anti-India". "It is Narendra Modi and Amit Shah who are dividing the country and not those who are protesting to uphold the Constitution," she said.