Clashes once again broke out between the BJP and the Trinamool Congress workers in West Bengal on Friday, with an instance reported from Asansol. 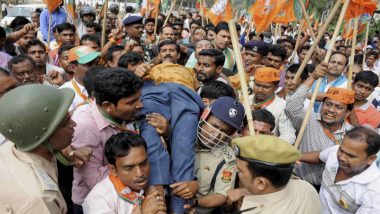 Asansol, July 6: Clashes once again broke out between the BJP and the Trinamool Congress workers in West Bengal on Friday, with an instance reported from Asansol. The ruckus started while the TMC was organising a blood donation camp in the region. Workers from both the parties hurled abuses and pelted stones at each other.

"We were just trying to save the lives of people by organising a blood donation camp. But the people from the BJP started interfering and creating problems," said the Asansol Mayor.Minutes after receiving the news of the clashes, the local police immediately erected several barricades in five major areas of the region. West Bengal: 5 Killed in BJP-TMC Clash in Basirhat City of North 24 Parganas District.

Police informed media that the Bharatiya Janata Yuva Morcha (BJYM) had gathered in the state as they were plannig a demonstration before the Asansol Municipal Corporation building demanding better civic facilities, but it did not have permission from the administration. The situation became grave after BJYM workers also fought with the police.

The party workers pelted stones at the officials in anger resulting in injuring several people. The police then lobbed tear gas shells to disperse the agitated protestors.West Bengal has been witnessing several incidents of clashes between BJP and TMC workers. Both the parties have blamed each for the incidents of violence.

Two more such incidents were reported from West Bengal's Purba Bardhaman district in June.In the first incident, a clash between the two party workers was reported in Mangalkot area of the district. However, no injuries were reported in the incident and the police forces were deployed to stop the situation from deteriorating further.In the second incident, the residence of Koichor Panchayat Deputy President from TMC, Biswajit Deb, was vandalised by locals yesterday.

Earlier, a clash broke out between members of student bodies affiliated with the Trinamool Congress (TMC) and the Bharatiya Janata Party (BJP) in Ramsaday College in Amta here.