Even as intelligence agencies are not unaware of the fact, Pakistan's Inter-Services Intelligence (ISI) continues to pump illegal drugs into India through Punjab -- the state lying on the border between the two neighbouring countries. 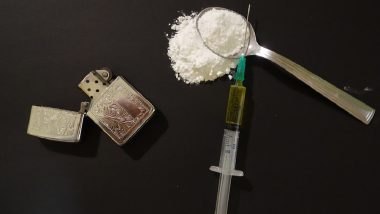 New Delhi, July 4: Even as intelligence agencies are not unaware of the fact, Pakistan's Inter-Services Intelligence (ISI) continues to pump illegal drugs into India through Punjab -- the state lying on the border between the two neighbouring countries.

And heroin has been the major narcotic being smuggled into India to generate funds which, experts indicate, are used to fund militancy in Kashmir.  Punjab: 'Drug-Addict' Kills Father in Amritsar After He Refuses to Give Money; Case Registered

After heroin, poppy is the second most smuggled drug followed by opium.

As per the Ministry of Home Affairs (MHA) data collated from all frontiers on the 3,323 km India-Pakistan border, over 979 kg of heroin was seized from the Punjab frontier in the last two-and-a-half years from January 1, 2019 to May 31 this year.

Smuggling of drugs from Pakistan was at its peak in 2020 during the last three years when 506.241 kg of heroin was seized at the Punjab border. The number was almost half in 2019 when 232.561 kg heroin was confiscated.

Besides heroin, opium and poppy have also been the choice of smuggling but the number was comparatively very less. Poppy is the second most preferred drug being smuggled from Pakistan after heroin.

Poppy is mainly smuggled into India through the Rajasthan frontier. A total of 23 kg poppy has so far been seized at the Rajasthan border till May 31 this year. The number of poppy recoveries was 70 kg in 2020 and 54 kg in 2019.

In all the recoveries, the Border Security Force (BSF), one of the seven Central Armed Police Forces (CAPFs), played a key role as they seized these narcotic drugs at the border before it reached the drug smugglers in Punjab and Rajasthan.

Along with the BSF, the Narcotics Control Bureau (NCB) plays a key role in curbing the drug menace in India. It has seized many consignments of drugs in joint raids with the BSF troopers based on inputs.

The vicious cycle of drug trafficking from Pakistan linking terrorists and the ISI's role was uncovered in late 2018 when the Indian Army and the intelligence arm of the Union Finance Ministry, the Directorate of Revenue Intelligence (DRI), seized a huge cache of arms and ammunition and drugs, including heroin worth Rs 105 crore, during a joint operation conducted near the Line of Control (LoC) at Chamb (Akhnoor Sector) in Kashmir.

It was the first time when the agencies here came to know about the direct involvement of terrorists in smuggling drugs meant to be pushed into Punjab. The strong connection between the terrorists operating in the Valley and the drug traffickers in Punjab was also unravelled then.

The agencies then also came to know about how terrorists are facilitating the movement of drugs from across Pakistan to Punjab by acting as couriers. The money being paid by the drug traffickers of Punjab is used by terrorists to fund the purchase of sophisticated weapons to foment terror in Kashmir.

Despite the fact being known to the agencies, the ISI, whom the intelligence agencies see as the brain behind all illegal cross border activities against India, did not change its tactics and keeps pushing drugs mostly through the border touching Punjab.

(The above story first appeared on LatestLY on Jul 04, 2021 09:33 AM IST. For more news and updates on politics, world, sports, entertainment and lifestyle, log on to our website latestly.com).