The Tirumala Tirupati Devasthanams (TTD) will soon start selling fragrant incense sticks, made out of the flowers offered to the deity, a temple official said on Wednesday. 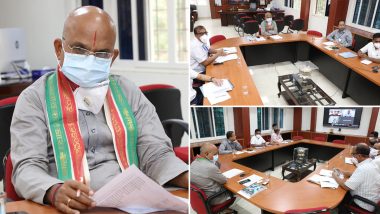 Tirupati, July 21: The Tirumala Tirupati Devasthanams (TTD) will soon start selling fragrant incense sticks, made out of the flowers offered to the deity, a temple official said on Wednesday.

"TTD has decided to brighten up the houses of Srivari devotees soon with the divine fragrance that emanates from the incense sticks made out of the sacred garlands which are being used in all the TTD-run temples every day," the official said.  Tirumala Tirupati Devasthanams Condemns Media Houses for Publishing Fake News and Confusing Devotees

According to the temple body, Darshan International Ltd, a leading Karnataka-based incense sticks maker, has come forward to make the incense sticks on a cost-to-cost basis.

"In the first phase, these sacred incense sticks will be sold to devotees near the laddu counters in Tirumala and later on at other places," the official said.

Meanwhile, Reddy also discussed strengthening TTD's S.V. Ayurvedic pharmacy. Officials informed the EO that the Ayush Ministry gave its nod to 115 products belonging to the TTD and 70 more are in line.

The EO has also directed SV Dairy Farm officials to take up manufacturing of 15 varieties of products out of panchagavya.

(The above story first appeared on LatestLY on Jul 21, 2021 11:18 PM IST. For more news and updates on politics, world, sports, entertainment and lifestyle, log on to our website latestly.com).