Andre Huseman The Hitman Outside Of The Ring

Andre Huseman is a force to be reckoned with both inside and outside of the boxing ring. While most people know him from his boxing days, there’s actually so much more to him than that. From screen printing tees to sell out the back of his Mustang to training celebrities to box, Andre can walk the walk and talk the talk in business. 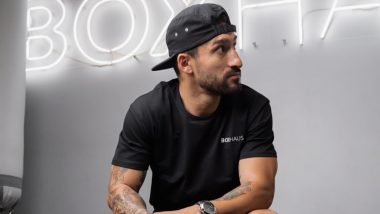 Andre Huseman is a force to be reckoned with both inside and outside of the boxing ring. While most people know him from his boxing days, there’s actually so much more to him than that. From screen printing tees to sell out the back of his Mustang to training celebrities to box, Andre can walk the walk and talk the talk in business.

A Teen With a Dream

For Andre, the thought of becoming an entrepreneur came to him when he was 15, and his mother asked what he wanted to do when he grew up. His response was far from that of a typical teenager. He responded, “I don’t know, Mom, all I know is I want to wear a suit. I want to have a really nice car, and I want to be closing deals on the phone.”

Having grown up in the 90’s, these are the things Andre learned to associate with success, as did many others raised during this time. Since that conversation, the thought has stayed with him, and he had his first taste of entrepreneurship about 15 years ago.

His First Taste of Entrepreneurship

Andre started in the fitness industry 15 years ago at the well-known gym Twenty- Four Hour Fitness. At this gym, he began first to learn the ropes of how to become a personal trainer and then moved on to learning management. It was common for him to get recruited by other gyms and studios to help build up their business and move on.

This kept him busy until 2012-13, when he decided to go independent and never work for someone else again. By this point, he had learned everything he needed to know from corporate America anyway and knew it was best for him to start something of his own. While the business was unsuccessful, it gave him a perspective of what being an entrepreneur is like with personally buying all the supplies and doing all the work.

A Period of Personal Growth

Every entrepreneur will tell you how important personal development is on the road to success, and Andre would definitely agree. Shortly after his screen printing stint, he began to dive into books and seminars, even meeting President Donald Trump at one point (before he was President). It was from people like Trump, Andy Andrews, Les Brown, Tony Robbins, and more where he gained the knowledge to take a look into himself and tap into his inner entrepreneur.

Andre spent time learning how to draft agreements, look at term sheets and operating agreements, and just learning business jargon in general. Something else he learned was just how important meaningful relationships are and how to create them. So, over the years, he’s developed and nurtured many significant relationships, some of which are with global icons from various industries. From venture capitalists and private equity consultants to professional athletes, Andre has created a network of friends who anyone would be proud to call their own.

It was these experiences that helped Andre create BoxHaus, his own personal home run, which is where most people know him from.

Andre brings a great deal of value to every table he sits at, and he doesn’t expect this to change anytime soon. Quite the contrary because most people who know him will tell you that he’s always working on something such as new partnerships. Those who are lucky enough to spend any amount of time around him get inspired by his mindset and his energy because he’s always on the move and thinking about what’s next.

As far as where he’s at personally, remember when he told his mom what he wanted to do in life? Well, he gets to wear a suit when he wants, he closes deals on the phone, and his car is pretty nice too! So it seems like he’s almost there!

In the end, Andre can teach us all a thing or two about the power of determination and that it doesn’t matter how many times you fail as long as you keep going!